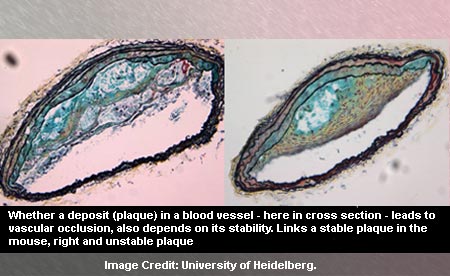 ‘Thick’ blood not only seems to cause heart attack and stroke, but also prevents them. Atleast this is what scientists at Heidelberg University Hospital have to say.

Scientists explained the mechanism of this clinical paradox for the foremost time on an animal model. Supposedly, mice have a greater tendency to form blood clots as well as they have larger plaques in their vessels. However, they seem to be more stable. Therefore, there appears to be less possibility that these plaques will rupture thereby obstructing circulation.

In theory, the more blood coagulates, the greater is the risk of vascular obstruction. Anticoagulants may perhaps guard against these complications. Clinical studies have not yet proven that an increased clotting tendency may also have unfavorable effect for plaque development.

For the purpose of the study, experts examined mice with high blood fat levels and a genetic defect which could perhaps lead to an increase in blood clotting.

Dr. Berend Isermann, consultant at Heidelberg University Hospital, Department of Internal Medicine I and Clinical Chemistry and Medical Director, Professor Dr. Peter Nawroth along with his team were noted to have recently found an explanation for this.

The findings revealed that the mice seemed to have developed larger plaques in contrast to those without the genetic defect. However, the plaques were observed to have been more stable.

Furthermore, no vascular obstruction was detected, since the vascular wall expanded in order to adjust to the novel situation. Supposedly, the harmful effect of larger plaques on circulation was compensated by the positive effect of stability and a greater vessel diameter.

However, the long-term use of anticoagulants appears to have inverted these advantages. The size of the plaques seems to have decreased, but stability was lost thereby increasing the possibility of complications. The anticoagulants used in this case were known to be low molecular weight heparin.

“Our findings were made on mice, but they confirm the results of clinical studies on humans. In addition, in vitro studies show that human cells react similarly to mouse cells,” says Dr. Isermann.

Experts were of the opinion that the results could perhaps be transferred to humans. They further recommended that the pros and cons of anticoagulants should be carefully evaluated before giving them to a patient.

Dr. Isermann further continued, “Currently there is no indication that these new observations also apply to drugs that inhibit the function of platelets.”

When make a decision regarding the treatment, the cause of the coagulation disorder and the degree of previously existing atherosclerosis must be taken into consideration. Moreover, experts recommend using anticoagulants which reduces certain coagulation factors in order to maintain the positive effects on plaque stability.

“It is important that plaque stability and the influence on atherogenesis are also studied in these trials,” elucidates Dr. Isermann.

It was believed that various latest drugs which inhibit specific coagulation factors are at present being studied in clinical trials.