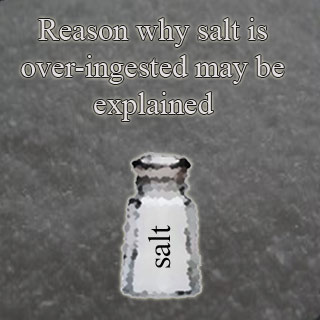 The next time you are tempted to add more salt to your food, don’t feel guilty about it. It has been stated by a new study that salt may act like a natural anti-depressant. People crave for it because it probably gives them a mood lift! This interesting study was conducted by the University of Iowa.

A study on rats revealed that, the sodium deficiency in them reduced their indulgence in activities that they usually enjoy; for instance drinking a sugary substance. This hints at the role that salt may play in elevating one’s mood. These findings could help in a better understanding why people are tempted to over-ingest it, inspite of knowing its harmful adverse effects on health.

Kim Johnson, psychologist at the University of Iowa, says that, “Things that normally would be pleasurable for rats didn’t elicit the same degree of relish, which leads us to believe that a salt deficit and the craving associated with it can induce one of the key symptoms associated with depression.”

It is stated that on consumption, salt may trigger a pleasure mechanism in the brain. This could explain why some people over-ingest salt, inspite of being aware of its health hazards. In fact, evidence has also been found to state that salt is an addictive substance which is being abused in today’s world, very similar to drugs.

A sign of addiction is to continue using a substance inspite of being fully aware of its harmful effects. Addiction in a person can also be defined by the intensity of their cravings when with-held from their object of addiction. This alteration in brain activity was noticed by the study investigators in the brains of the rats, whether they were introduced to drugs or salt deficiency. Thus, suggesting that cravings for salt may possibly be linked to similar brain pathways that are responsible for drug addiction.

A review of these findings were published in the July issue of the Physiology and Behavior journal.