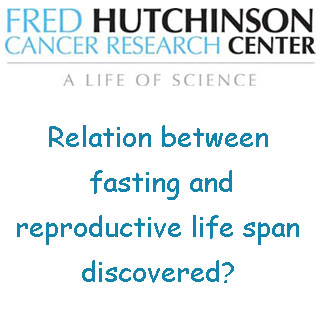 Women may be happy on hearing this news. Scientists have always said that females are born with their whole lifetime’s supply of eggs and once it is over, it is forever gone. But a latest research by Fred Hutchinson Cancer Research Center claimed that this supposedly does not hold true for at least nematode worms.

Sexually mature adult worms seem to stop ovulating and the germline component of their reproductive system i.e. the sex cells, including mature and maturing eggs die off and leave behind nothing but a few stem cells during starvation. This was reported by molecular physiologist Marc Van Gilst, Ph.D and his colleagues. The conserved stem cells can supposedly generate a new crop of sex cells which is complete with youthful and fertile eggs once normal food conditions are recommenced. The reproductive clock seems to turn back in small C.elegans soil worms that are apparently 15 times older than generally fed worms in their reproductive prime.

Van Gilst, an assistant member of the Hutchinson Center’s Basic Sciences Division, who authored the research with postdoctoral research fellow Giana Angelo, Ph.D commented “For many, it has been assumed that cells and organs remain relatively stable during periods of starvation or caloric restriction. The idea that an entire system would kill itself off during starvation and then regenerate upon food restoration was very surprising. The fact that extremely old worms could generate new eggs and produce healthy offspring long after their normally fed counterparts had reproduced and died was also unexpected.”

Van Gilst mentioned “The identification of a nuclear receptor that turns on and off the beneficial response to nutrient deprivation would be of great interest because it would be a candidate for drugs aimed at tricking the body, or specifically the reproductive system, into thinking they are calorically restricted or starved, even when food intake is normal.”

The biomedical repercussions of organisms such as flies and worms cannot be ignored.

Van Gilst mentioned “Many paradigm-shifting discoveries in C. elegans have since been replicated in humans. Therefore, the idea that our findings will be relevant to human reproduction is a possibility that certainly needs exploration.”

It is apparently still not known as what extent of caloric limit would be needed to impact egg production in humans even if the mechanism is conserved in humans.

Van Gilst commented “If such a process exists in humans, it likely evolved to help our ancestors preserve fertility during periods of famine or food shortage. We certainly don’t have a prescription for famine. Consequently, our study should not be used to promote potentially dangerous interventions such as severe caloric restriction and starvation as a means to restore a woman’s fertility.”

To understand the basic mechanisms that control fertility, Van Gilst and his colleagues will continue to study the miniature worm. This research may apparently help solve one doubt i.e. in few cases women who are recuperating from radiation and bone marrow transplantation which destroys or damages much of the germline, including mature and immature eggs, are supposedly able to get back their fertility.

Van Gilst mentioned “There is controversy over how this occurs. On the one hand, it has been argued that new eggs are generated from the woman’s germline stem cells through a process that may mirror the germline regeneration we observed in C. elegans. In fact, there is controversy over whether or not germline stem cells exist in adult women. We believe that our work in C. elegans throws another hat in the ring, raising the possibility that germline stem cells may indeed be present in women and that their activity may surface under conditions of nutrient deprivation or stress.”

The two types of nematodes worms are the ones that were genetically normal and the other that lacked the functioning NHR-49 gene. The researchers withheld food from them. Every few days, the worms were supposedly screened by microscopy to examine changes in their reproductive system including ovulation, cell death and germline stem cell survival. Food was again reinstated and the worms were scrutinized by microscopy to evaluate the recovery of their reproductive system post different periods of starvation. After mating, the fertility was apparently decided by counting offspring.

This research was published online in the journal Science.