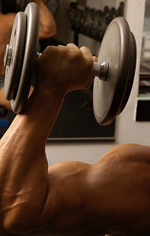 Weightlifting may cause a temporary increase in pressure within the eye, with higher pressure occurring with breath-holding during a weightlifting exercise, according to a report in Archives of Ophthalmology.

Intraocular pressure (the pressure within the eyeball) is generally decreased after aerobic exercise, such as running and biking, and nonaerobic exercise, including weightlifting, according to background information in the article. However, higher intraocular pressure has been reported during the Valsalva maneuver, in which air is forced against a closed windpipe and pressure increases in the chest. This action occurs during coughing, vomiting, playing wind instruments and sometimes weightlifting.

The increased pressure could be due to the Valsalva maneuver or a similar motion performed during bench presses; the even higher pressure during the first repetitions “may be due to greater intrathoracic [chest] pressure caused by the air retained in the lungs when the subjects held their breath during intraocular pressure measurement,” the authors write.