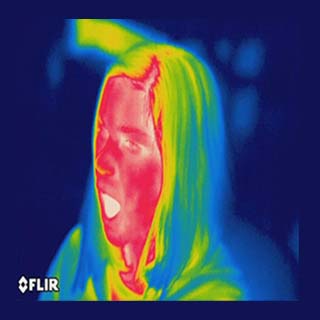 A University of Toronto professor claims to have discovered a novel method for people with severe motor impairments in order to communicate by making use of an infrared camera.

Supposedly, infrared thermography refers to the measurement of the radiation emitted by the surface of an object in the infrared range of the electromagnetic spectrum. Infrared cameras are believed to use specialized lenses manufactured in order to focus thermal radiation onto a focal plane of infrared detectors.

Professor Tom Chau, director of the clinical engineering program and senior scientist and theme leader of innovation and development at Bloorview Research Institute, claimed that infrared thermography could possibly be used as a non-invasive and non-contact access pathway. Through this method individuals with disabilities may be able to interact and perhaps eventually communicate.

For the purpose of better understanding this criterion, Chau exploited the local temperature changes associated with the mouth opening and closing.

Chau said that, “The human body is an emitter of radiation and the radiation that’s emitted can be measured. In the face there’s a complex network of blood vessels. When you experience different emotions there’s different flow of blood through the face and this causes temperature changes we can measure non-invasively using a thermal camera.”

Apparently, he first came up with the idea while examining a patient in his 20s who was unable to speak.

“One thing [the patient] could do reliably was open and close his mouth and that’s a very tricky thing to capture. We came up with the idea that a person is warmer when they open their mouth. As long as there’s heat there, the camera can pick it up. We are looking for a temperature change and motion when a person opens and closes his mouth. If you’re just moving your head, it doesn’t work because there is no temperature change,” elucidates Chau.

He further added, “The mouth opening/closing just acts as a switch. That switch can be used to select letters of the alphabet from an on-screen keyboard or images in a picture communication board. That’s how someone can use the one action (mouth opening/closing) to make choices. Now this individual is able to type on a computer using the thermal camera switch.”

“A couple of weeks ago, the individual said his first word in his life, in his 26 years. This was in the lab and his mother was there. He was typing letter by letter [using his mouth as a switch]. He typed m-u-t-h-e-r. His mom realized he was saying mother and she just broke down in tears. It was a dramatic moment. It has become such a liberating technology for this individual,” continues Chau.

Inside the lab, the camera seems to have been pointed at him while he was sitting in front of the computer. Also, every time this individual points out to a letter he wants, he apparently opens his mouth and the camera captures it.

Chau claimed that the technology seems to have made all the difference for his patient. He along with his team claim to be the first in the world to have used infrared thermography for this purpose. Also, he was the first person to publish on the thermographic technology.