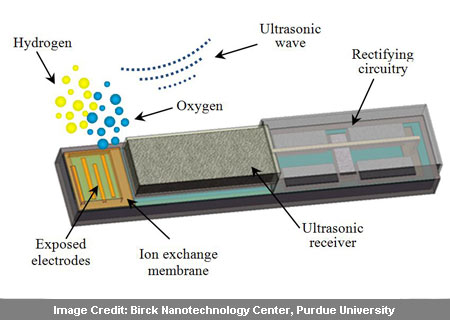 Chemotherapy and radiation, commonly used to treat cancers apparently require oxygen to work efficiently. Scientists at the Purdue University have apparently produced and tested minute devices that ought to be transfixed in tumors for generating oxygen.

More oxygen may accelerate the killing potential of radiation and chemotherapy. The technology has been crafted to treat tough tumors that are also hypoxic at the center, which implies that their interior comprises less oxygen.

“This is not good because radiation therapy needs oxygen to be effective. So the hypoxic areas are hard to kill. Pancreatic and cervical cancers are notoriously hypoxic. If you generate oxygen you can increase the effectiveness of radiation therapy and also chemotherapy,” explained Babak Ziaie, a Purdue University professor of electrical and computer engineering and biomedical engineering.

This electronic device which is a new implantable micro oxygen generator, apparently gauges ultrasound signals and utilizes the energy to produce a small voltage causing the separation of oxygen and hydrogen from water during water electrolysis. Ziaie says that the team is inserting these devices within tumors which are then made to undergo ultrasound. The energy created by the latter fuels the device and thus produces oxygen.Trials conducted with mice have disclosed that the process seemingly generated oxygen and also narrowed the tumors at a faster rate than those devoid of the devices. These tiny electronic pieces look less than a centimeter long and are deemed to be introduced into tumors using a hypodermic biopsy needle.

The scientists now plan to rework on the device so that is could work practically in clinical trials. The device was synthesized at the Birck Nanotechnology Center in the University’s Discovery Park. The research appears in Transactions on Biomedical Engineering.