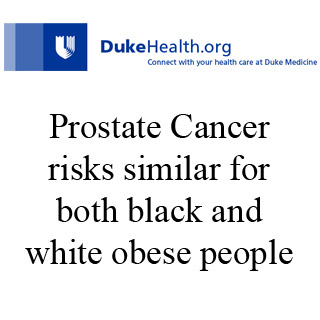 According to a study conducted by experts at the Duke University Medical Center, when it comes to obesity supposedly no one is spared in increasing their threats of recurrence of prostate cancer post surgery. This result was found after looking at a large database of prostate cancer patients. Yes, being overweight appears to be likewise terrible for both the blacks as well as the whites.

“Not so, Obesity leads to worse cancer in both groups,” commented Stephen Freedland, MD, an associate professor of urology and pathology in the Duke Prostate Center and the senior author of the study.

Obesity is known to be connected to usually bad outcomes in many cancers including prostate cancer. Some studies have appeared to have suggested that obesity might be more of a threat issue to blacks than whites because according to them blacks have a higher tendency to die from prostate cancer. This is mainly because there seems to be a higher occurrence of obesity among black men as opposed to the white men.

Freedland and Jayakrishnan Jayachandran, MD, a urologic oncology fellow at Duke and the lead author of the paper, analyzed the records of 1415 men enlisted in the Shared Equal Access Regional Cancer Hospital (SEARCH) database who had undergone a radical prostatectomy. He found out that almost half (47 percent) of the sample consisted of black men.

After regulating for different preoperative characteristics, experts evaluated the correlation between the body mass index (BMI) and the forcefulness of the cancer. It was calculated by the risk of recurrence. Experts apparently found no connection between race and obesity as opposed to other studies. Irrespective of the race, approximately a third of the men were found to be obese.

Jayachandran mentioned “We found that higher BMI was associated with significantly increased risk of cancer recurrence for both blacks and whites,” He also remarked “Though prior SEARCH-based studies from our group found that obesity was associated with a higher risk of disease progression as measured by a rising PSA after surgery, it now appears that being obese just means a poorer prognosis, period, regardless of race.”

Jayachandran is not certain as to why that might be the case but he is of the opinion that altered hormone levels may have something to do with it.

He claims “Obesity is associated with more estrogen and less testosterone, and it may be that lower testosterone promotes more aggressive tumors as recent studies have suggested.”

Jayachandran adding to it mentions that modification in the production of other hormones like insulin, insulin-like growth factor or leptin which take place in obese men, might also be responsible in the development of more aggressive tumors. He claims that they have not fully understood it but are actively studying all of these factors.

This study appeared in the journal Cancer.

Rock Climbing does not Increase Risk of Osteoarthritis, study proves