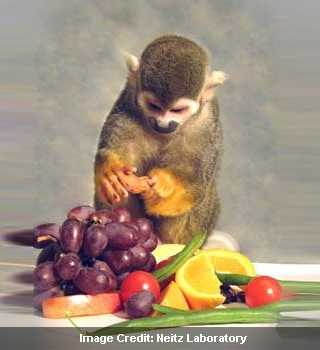 Some animals like certain types of monkeys are said to be color blind. A research conducted at the University of Washington and the University of Florida now reveals that researchers apparently used gene therapy to treat color blindness in two squirrel monkeys. The condition is believed to be the most common disorder in people.

The researchers supposedly shed a rosy light on the possibility for gene therapy to apparently treat adult vision disorders which may engage cone cells. They are said to be the most vital cells for vision in people.

William W. Hauswirth, a professor of ophthalmic molecular genetics at the UF College of Medicine and a member of the UF Genetics Institute and the Powell Gene Therapy Center, commented, “We’ve added red sensitivity to cone cells in animals that are born with a condition that is exactly like human color blindness. Although color blindness is only moderately life-altering, we’ve shown we can cure a cone disease in a primate, and that it can be done very safely. That’s extremely encouraging for the development of therapies for human cone diseases that really are blinding.”

The result may probably interest millions of people around the world who may be color blind. This apparently includes around 3.5 million people in the United States, more than about 13 million in India and supposedly more than 16 million in China. Generally, men may be affected by this problem. About 8 percent of Caucasian men in the US appear to be incapable of discriminating red and green colors which are said to be extremely vital for daily things such as identifying traffic lights.

Jay Neitz, a professor of ophthalmology at the University of Washington, mentioned, “People who are colorblind feel that they are missing out. If we could find a way to do this with complete safety in human eyes, as we did with monkeys, I think there would be a lot of people who would want it. Beyond that, we hope this technology will be useful in correcting lots of different vision disorders.”

This discovery comes about 10 years after Neitz and his wife Maureen Neitz, apparently started training two squirrel monkeys named as Dalton and Sam. Apart from coaching the animals, the Neitz research group apparently worked with the makers of a standard vision-testing technique known as the Cambridge Colour Test to perfect a method the monkeys could ‘tell’ them which colors were seen by them.

The test which is given to elementary children the world over is similar to the test which was given to the monkeys. In the test, the students were apparently asked to recognize a particular pattern of colored dots among a field of dots that may differ in size, color and intensity. For the monkeys, the researchers apparently worked out a computer touch screen the monkeys may use to outline the color patterns. They apparently received a prize of grape juice, when they chose correctly.

Similarly, many years were spent by Hauswirth and colleagues at the University of Florida to formulate the gene-transfer technique that may use an apparently safe adeno-associated virus to transport corrective genes to supposedly generate a preferred protein. In this case, researchers apparently wanted to create a substance known as long-wavelength opsin in the retinas of the monkeys. This certain form of opsin may be a colorless protein that could work in the retina to apparently make pigments that are claimed to be sensitive to red and green.

Hauswirth is apparently also involved in a clinical trial with human patients to test gene therapy for the treatment of Leber congenital amaurosis which is a form of blindness that may affect children.

He remarked, “We used human DNAs, so we won’t have to switch to human genes as we move toward clinical treatments.”

The monkeys apparently started to obtain color vision, about 5 weeks post treatment. It supposedly took more than a year and a half to test the monkeys’ ability to differentiate 16 colors, with some of the shades being supposedly as different as much as 11-fold in intensity.

With the finding, these researchers are claimed to be the first to attend to a vision disorder in primates in which all photoreceptors may be undamaged and fit, providing a clue of gene therapy’s full possibility to reinstate vision.

Around 1 in 30,000 Americans may have an inherited form of blindness known as achromatopsia, which could cause almost complete color blindness and enormously poor central vision.

Hauswirth mentioned, “Those patients would be targets for almost exactly the same treatment.”

Hauswirth is of the opinion that even in common types of blindness like age-related macular degeneration and diabetic retinopathy, vision may potentially be rescued by aiming cone cells.

Gerald H. Jacobs, a research professor of psychology at the University of California, Santa Barbara, who was not involved in the research, commented, “The major thrust of the study is you can ameliorate if not cure color blindness with gene therapy. There are still questions about safety, but in these monkeys at least, there were no untoward effects. Those who are motivated to ameliorate their color defect might take some hope from the findings.”

Jacobs mentioned that there is also another example of how utterly plastic the visual system is to change. The nervous system can extract information from alterations to photo pigments and make use of it almost instantaneously.

This research was published in the journal Nature.