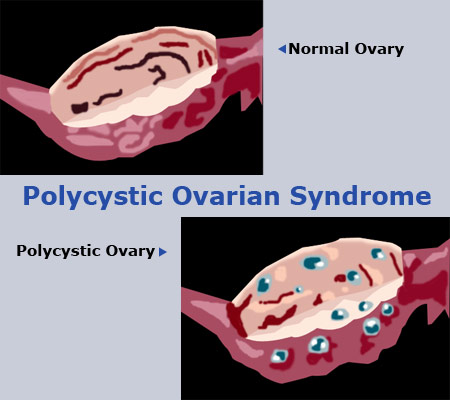 In a recent article, HealthJockey.com reported that women are better equipped to fight diseases. This is believed to be due to higher levels of Estrogen in women. However, the same hormone along with others can also wreak havoc in the body when out of balance or sync. Hormones are powerful in their biological activity. Their role and interactions in the body are still not completely understood. Imbalance can cause diseases like diabetes and thyroid. Relative levels of hormones are diagnostic in many conditions. In fact, different levels of hormones might make a difference as to how an individual copes with a disease or condition.

One of the diseases showing rising incidence is PCOD – Polycystic* Ovarian Disorder (Polycystic*: Many cyst-like structures are observed around the ovary on ultrasound as will be covered under the ‘Diagnosis’ part of this feature.) It is caused by hormonal imbalance in females and is characterized by:

Years of hormonal imbalance can increase susceptibility to:

The gamut of manifestations of this condition is referred to as PCOS – Polycystic Ovarian Syndrome or Stein Leventhal Syndrome. Since you are reading this feature, chances of you being an alert reader go up dramatically. This also means you have probably come across this term before and have read some fleeting column about it somewhere. Regardless, we will attempt to put things into perspective and break some common myths in this feature.

The causes of this disorder remain largely unknown though a genetic component is suspected. This means if the mother has or had PCOS, the daughter has increased chances of developing it. Multiple cysts are observed in the ovaries of patients on ultrasound. The ovaries become enlarged and deranged. Excessive amounts of androgen and estrogen are produced which affects frequency of periods. This coupled with absence of ovulation leads to infertility. Obesity seems to be both a risk factor and a symptom. This is because fatty tissues are hormonally active. These tissues release hormones such as estrogen and leptin which is believed to induce puberty. A vicious cycle is thus set up which becomes increasingly harder to break as diagnosis is delayed. Stress cannot be ruled out as a factor since it can lead to irregular periods further disturbing hormonal levels.

6-10% women are believed to be suffering form PCOD. However, in as many as one-third of cases, symptoms may not be so overt as to aid conclusive diagnosis. PCOS remains a grossly under-diagnosed and under treated disorder till date.

Hormonal disorders in females can be varied and complicated. However, this particular disorder is definitely on the rise. Doctors in cities report that cases have gone up as many as 10 times as compared to a few years ago!

Who can it affect?

The patients who are getting affected by PCOD are worryingly those falling into the younger and younger age bracket. Theoretically PCOS can set in with the menarche; i.e. when a girl starts getting periods. As the onset of menstruation is being observed at a younger age, the onset of PCOS can also be alarmingly early. As a result, increasing number of cases are being reported in girls as young as 13-14 years. Many studies have been conducted as to the reasons of menarche occurring earlier. Obesity and contamination (pesticides) emerge in many of these studies. However, that may perhaps be the topic of another feature. The moot point here is an early puberty and early menarche puts young girls at higher risks of developing many complications, PCOS being just one of them.

Diagnosis would seem relatively straight forward with symptoms such as irregular periods and/or heavy periods, weight gain, excessive facial hair and pimples but not all cases present themselves so clearly. Central to conclusive diagnoses is an ultrasound.

A vaginal ultrasound is used to confirm cases of Polycystic Ovarian Syndrome. More than 10 follicles are to be seen around an ovary which itself may be enlarged to confirm a case. These are to be distinguished from ‘multi-cystic’ ovaries which can occur with multiple births and treatments like with FSH to induce ovulation. It is also important to note that these morphologies are not always easy to spot and identify and a great deal depends on the skill of the technician and doctor. As mentioned earlier, up to a third of women may not have polycystic ovaries and yet present with symptoms. Conversely, many women may have polycystic-looking ovaries and yet not suffer from PCOS. A second opinion is thus advisable in the face of continuing symptoms and non-conclusive diagnosis. Modern techniques like diagnostic laproscopy are bringing a sea change in the prognosis and treatment of such cases and should be opted for if the means exist.

As with any disorder, early detection is essential. More so because of the serious complications it can lead up to as mentioned above. PCOS may go undetected for years in some cases due to absence of outward symptoms, ignorance or under-diagnosis.

The first thing to understand is that this being a hormonal disorder, it is chronic. So there are no ‘cures’. Treatment aims at alleviating symptoms such as pain during menses, hirsutism, acne etc and assisted reproduction if so desired.

Metfromin: This drug, discovered over 2 decades ago, is the first line of treatment against diabetes. Since in PCOS, insulin resistance is observed, Metformin works here too. Metformin has a proven ability to induce menstruation by lowering glucose levels and hence can also alleviate symptoms related to PCOS. Although malaise and nausea are frequently observed side effects, treatment with Metformin is by and large safe. The decision to take Metformin; off course, has to be taken under a doctor’s supervision.

Weight loss: As mentioned earlier, obesity may be an outcome of PCOS and/or contribute to its severity. It was also noted that loosing those extra pounds would help relieve symptoms. It has been observed that even a 10-15 pound (5-7 kg) reduction in weight can dramatically alleviate symptoms. Exercise; of-course, is required but only a smart diet can achieve longer lasting effects. A high fiber-low sugar diet as required in diabetes would help as glucose levels need to be controlled. Nutrient supplements may be suggested by doctors.

Regularization of periods: This is becoming a growing need, especially among younger patients. Regularization not only improves predictability and increases chances of conception; it also mitigates the risk of developing uterine cancer. This is because the absence of menstruation results in building up of uterine lining which can result in cancer. Hormonal treatment with progesterone is generally employed. The more recent developments such as treatment with a regimen of Drospirenone (a novel synthetic progesterone) + estrogen are now available in India. These represent an expensive but safe way of regularizing periods. In addition, this treatment also shows improvement in acne and hirsutism. It usually takes 6 months for such hormonal treatments to regularize periods. These are essentially oral contraceptive pills that are to be taken for 23 days in a month. The fact that these pills are actually contraceptives may result in some resistance and anxiety in patients although contraceptive action may be looked upon as an added advantage! However, it is important to understand that these pills bring the hormonal levels to normal. This is the same mechanism that is used to avert (not abort) pregnancy.

Conceiving: PCOS causes infertility. In fact, it may go undetected for years even as it causes multiple miscarriages or simply failure to conceive. Treatment in such cases is again hormonal. First, periods need to be regularized in the manner described above. Once the gynecologist is convinced, he/she takes the patient off the contraceptives and begins treatment aimed at inducing ovulation. Treatments such as injectable gonadotropins and FSH are typically used.

Hormones affect in large part our health and hence quality of life. Hormonal disorders can be baffling, crippling and of a chronic nature. Though we may not yet know everything about disorders such as PCOS, vigilance and regular visits to a doctor can certainly help. You can start by answering these simple questions to know if you are at risk and passing them on to friends and family:

2. Have you ever experienced no menstruation for 4 months or more?

3. Do you suffer from irregular periods or, just stains at times?

4. Are you facing problem to conceive?

5. Do you have excessive hair on your face or body?

6. Are you irritated with your pimples?

7. You are losing your hair regularly?

8. Do you have velvet kind of skin near your neck?

9. Have you suddenly gained some weight?

10. You are getting fatter at your hip?

11. Do you love to take sweets or feel dizzy after taking food?

12. Does any one of your first degree relative have Type II diabetes?

If your answer to more than 5 of these 12 questions is ‘yes’, there is fair possibility that, you may be suffering from PCOS. If that be the case, consult a gynecologist immediately.