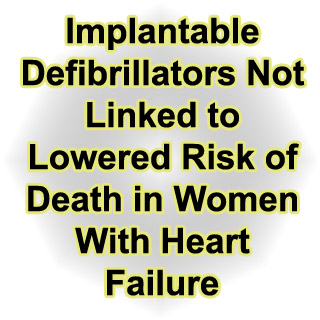 Implantable cardioverter-defibrillators apparently do not seem to be linked with a decreased threat of death in women with advanced heart failure. This was claimed by a meta-analysis of an earlier published analysis.

According to the background information, around 5.3 million Americans are apparently affected by heart failure. Amongst them, almost half of them are supposedly women. Patients with heart failure may have six to nine times more chances than the common population to apparently undergo unexpected cardiac death.

In addition to medication, treatment for heart failure apparently engages in averting unexpected cardiac death through the implantation of a cardioverter-defibrillator. This therapy is apparently maintained by several clinical trials. Nevertheless, questions concerning the advantages in particular patient subgroups, including women remain unanswered.

Experts apparently looked for trials of implantable defibrillator therapy for heart failure patients which took place between 1950 and 2008. The analysis was led by Hamid Ghanbari, M.D., and colleagues at Providence Hospital Heart Institute and Medical Center, Southfield, Mich. It supposedly incorporated data on the possibility of death for female patients. About five suitable trials that included around 934 women were recognized.

It was seen that none of the trials showed any vital advantage of defibrillator implantation over medical therapy for women. It was found out that the implantable cardioverter-defibrillator was supposedly not linked with a decreased all-cause mortality in women as the experts accumulated the data and conducted a meta-analysis. Apparently among the 3,810 men in the studies, a statistically considerable reduction in death rate was supposedly found in each of the five trials alone and in the collective meta-analysis.

The authors mentioned, “Most clinical trials have been heavily weighted toward men; therefore, generalization of the results to women remains questionable. The best answer to this problem would be to perform a clinical trial that specifically targets women with heart failure to test the hypothesis of whether implantable cardioverter-defibrillator implantation reduces their overall mortality [death] rate. However, on the basis of our findings it seems that a trial targeting women is needed, and a meta-analysis such as ours may be an appropriate first step to explore this hypothesis.”

There seems to be numerous reasons for the sex differences in these results. Among patients with heart disease, it may be seen that women may have about one-fourth the danger of unexpected cardiac death as men. This may be because women apparently have diverse patterns of arrhythmias and also as they seem to have more co-occurring illnesses that may augment their risk of death from other causes. A larger study population may be required to demonstrate any advantage of defibrillator implantation in women reveal experts.

This study was published in the Archives of Internal Medicine, one of the JAMA/Archives journals.