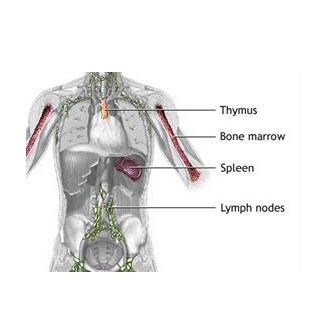 A drug apparently deprived non-Hodgkin of their capability to live for a long time and multiply swiftly. This was claimed by a study conducted in the department of Microbiology & Immunology at the University of Rochester Medical Center.

To function normally, the cells that make up bodily tissues should apparently decide when to split and multiply and when to die. Cell death apparently curb the human cell population as compensation to growth, and billions of cells ought to die every year just to keep the amount constant. Cell growth and death may vigilantly be synchronized by signaling networks, which both may promote and discourage survival. Tumor may result when this counterpoise may incorrectly move too far in favor of growth.

One such network apparently spins around neurotropins, which supposedly informs nerve cells not to die, and to keep multiplying, as part of standard function. The same neurotrophic signals are identified to cause cancers of the central nervous system when disturbed by carcinogens. The present study discovered that neurotrophins could also cause major immune cells to resist cell death and reproduce as part of the most deadly of lymphomas, and that an untried compound, the fungal chemical known as K252a, apparently reinstated their capability to die.

Non-Hodgkin Lymphoma (NHL) is believed to be the umbrella for more than about 30 cancer types that could expand in a vital kind of white blood cell, the lymphocyte. Lymphocytes apparently incorporates B cells, workhorses of the immune system that might join to invaders like bacteria, viruses and may generate an army of antibodies which are supposedly planned to assault the particular pathogen at hand. In NHL, B cells in the lymphatic system may develop unusually, and most patients may be diagnosed too late to apparently profit from usual chemotherapy.

Sanjay Maggirwar, Ph.D., associate professor in the Department of Microbiology & Immunology at the University of Rochester Medical Center, and corresponding author of the study, commented, “We believe we have found a subtle, precise mechanism that shortens the lifespan of many kinds of cancer cells while enabling normal B cells to live on.”

Cell death is said be controlled by a network of signals which apparently includes toxins, hormones and growth factors such as the neurotrophins, which might their effect by communicating with particularly shaped proteins known as Trk receptors on cell surfaces.

Among the signaling pathways generated, when a neurotrophin attaches to its Trk receptor is that for the nuclear factor kappa B (NFkappaB) protein complex, which turns on genes that might differ with the cell type. In cancerous B cells, NFkappaB signaling codes for the construction of interleukin 6 which is claimed to be a signaling molecule already verified in previous studies to lengthen the lifespan of B cells.

The next step is to obstruct NFkappaB signaling, and more than 900 compounds have apparently done so. This signaling pathway may be crucial to the function of healthy human cells as well as tumor growth. A successful drug would have to obstruct part of the NFkappaB pathway, but apparently leave other portions unbroken. A presently available NFkappaB blocker, Velcade, has supposedly attained some success as chemotherapy as its intervention with the pathway may be indirect and mild.

The study drug, K252a apparently influences on NFkappaB signaling. It may also be accurately targeted, mild and easily reversed. The outcome of the study of Maggirwar’s claim that K252a apparently causes one part of the NFkappaB complex, a protein known as RelA, to come together within structures called nucleoli. Once there, RelA may no longer be able to converse with the gene-containing chromosomes that it could otherwise manipulate.

The ‘RelA redistribution’ mechanism may mean that it may let other parts of the NFkappaB complex, like RelA relative CRel, to carry on signaling. RelA and CRel claim to work interchangeably in many pathways, but only RelA may compel the expression of the gene that supposedly codes for IL6, motivating the longevity of B cell. In experiments, exposure to K252a apparently caused about five times as many stimulated B cells, which could strongly be similar to cancerous B cells, to apparently go through cell death than normal, resting B cells. In addition, experiments exposed that K252a supposedly keeps lymphoma-like cells from splitting and proliferating.

To extend their results to other cancer types, the team then apparently examined expression of Trk and neurotrophins in cell lines which are said to be deduced from breast cancer. Also Burkitt’s lymphoma and multiple myeloma, apparently have an effect of K252a on them. They apparently discovered the same autocrine neutrophin signaling cascade to survive in these other cancer cells, which may again promote unusual survival, and which K252a countered.

Maggirwar mentioned, “The current study results provide strong evidence for the existence of vicious cycle in Non-Hodgkin Lymphoma, a loop where B cells keep secrete too many neutrophins, which interact with too many Trk receptors on their surfaces, which drive abnormal survival of these cells. We believe the study drug broke this deadly loop in lymphoma cells.”

Along with the NHL in partnership with oncologists within the James P. Wilmot Cancer Center at the Medical Center, the team will apparently test the effects of K252a in live mice.

This study was published in the journal Experimental Hematology.