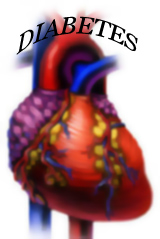 Dr. Goodarz Danaei, MD, from the Harvard School of Public Health, and his team who made the study remarked that although increased blood sugar-the amount of glucose in the blood, was only a sign that one was on the threshold of diabetes, it was soon turning into a killer even before the onset of diabetes.

Scientists calculated and examined data from 52 countries and noted that in addition to the 960,000 deaths caused due to diabetes each year, high blood sugar was itself linked to 1.5 million deaths from heart disease and 700,000 from strokes. “Our results show that one in five deaths from heart disease and one in eight from strokes worldwide are attributable to higher-than-optimum blood [sugar],” Danaei observed.

A disturbing trend observed was that diabetes was soaring at a staggering rate in Asian countries with doctors putting the figures of Asians suffering from the disease at 194 million in 2003 alone, adding that the number that could explode to an astounding 330 million by 2025.

Doctors have recommended a healthier lifestyle and increased awareness campaigns to stem the growth of this global killer which is placed alongside smoking, with 4.8 million deaths, obesity at 2.4 million deaths and cholesterol (3.9 million deaths) as one of the major causes of deaths worldwide.