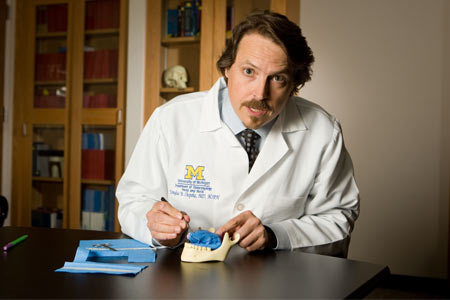 Cancer of the tonsil is said to be one among the head and neck cancers. It apparently develops in the part of the throat just behind your mouth, called the oropharynx. Smoking and consuming alcohol may increase the risk for tonsil cancer.

After a tonsil cancer surgery, it is believed that patients cannot speak or eat properly. But a new method for reconstructing the palate post surgery for tonsil cancer apparently preserved the capability of the patients to speak clearly and devour majority of the foods. This technique was developed at the University of Michigan Comprehensive Cancer Center.

Tonsil cancer apparently develops in the back of the throat, which could mean that surgery could contain parts of the palate, the tongue and the jaw. In conventional reconstruction efforts, a huge round piece of tissue was apparently taken to plug the hole left when the tumor is supposedly detached. But this apparently damages the way the palate and tongue function, and may not reinstate the intricate mechanism of the throat that may enable an individual to speak and swallow.

Study author Douglas Chepeha, M.D., M.S.P.H., associate professor of otolaryngology head and neck surgery and director of the microvascular program at the University of Michigan Health System, commented, “This is the area that triggers swallowing, that separates the mouth from the nasal cavity. It affects speech and eating – typically, patients have difficulty eating when they have this kind of tumor and undergo surgery. We can remove the cancer, but there are major quality of life issues.”

With the new method, surgeons first formed a tube from the rest of the palate by joining the palate to the back part of the throat, next to where the tumor was detached. This tube may isolate the mouth from the nasal cavity and shuts at the time of swallowing, thereby letting patients eat and speak.

Then the surgeons apparently stitch up the defect in the base of the tongue to detach the tongue from the rest of the reconstruction. This may ensure that the tongue could shift, which supposedly enhances swallowing and speech. The form of the left over defect is apparently uneven, so a pattern is supposedly planned for using transplanted tissue to fill in any other holes left by the surgery.

The tissue used in the reconstruction is claimed to be a transplant from the arm or a different part of the patient’s own body. L-shaped patterns, akin to dress patterns, might aid the surgeon to find the size and shape of the skin tissue they may eliminate for transplant.

Both groups apparently accounted for some issues with speech. Patients who had more than half their palate removed supposedly ate less and also informed about a few limitations to eating out in public. It was seen that in both the groups, the emotional scores appeared to be high. This apparently proposed overall satisfaction with their lives.

Chepeha commented, “In particular, patients who have less than half their palate removed do very well with this reconstruction. We’re trying to make sure the remaining tongue and palate they have really work. Our goal is to get patients eating in public and back to work.”

In recent years due to HPV, or human papillomavirus, the virus that is claimed to be associated with cervical cancer, the amount of tonsil cancers diagnosed has apparently increased quite a bit.

This technique has been described in the Archives of Otolaryngology – Head & Neck Surgery.