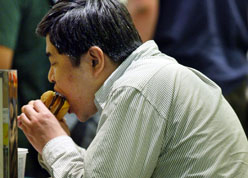 Burgers and booze have made waistlines expand to such an extent that, in Japan’s southern island of Okinawa, authorities in the capital have launched a slimming competition.

Girths are growing across Japan as lifestyles and diets have become more Westernised, according to a Health Ministry report earlier this year, some 29 per cent of men aged 20 to 60 are overweight compared with 24 per cent in 2000.

But the problem is at its worst in the far-flung island of Okinawa, said a spokeswoman for the city of Naha, where 45.4 per cent of men in their 40s and 50s are obese.

The spokeswoman said Okinawa, which has tumbled down Japan’s longevity rankings, could partly blame burger-munching

Americans who ruled the islands from the end of World War Two until 1972 and the thousands of US troops still stationed there.
“In the past, we had a plain and healthy diet, but ever since the American rule, our diet has become Americanised,” she said. And then there is the alcohol. “Here, we don’t have trains,” she added.

“It’s all cars so you can go out drinking on and on without worrying about the last train. Years of this has led to obesity,” the spokeswoman said.

Those who join the Naha city competition will have their bellies measured before and after their slimming efforts.
But anyone hoping to win a fabulous dinner for two, or perhaps a stash of chocolate will not need to enter. The prize will be recognition by the mayor and health club vouchers.