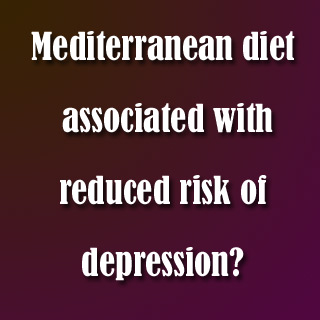 It was observed that the lifetime occurrence of mental disorders has been found to be lesser in Mediterranean as compared to Northern European countries. Apparently, one reasonable explanation is that the diet generally followed in the region may be protective against depression.

Earlier studies claimed that the monounsaturated fatty acids in olive oil could possibly be associated with a decrease likelihood of severe depressive symptoms. Olive oil is known to be used in abundance in the Mediterranean diet.

Almudena Sanchez-Villegas, B.Pharm., Ph.D., of University of Las Palmas de Gran Canaria and Clinic of the University of Navarra, Pamplona, Spain, stated that, “The specific mechanisms by which a better adherence to the Mediterranean dietary pattern could help to prevent the occurrence of depression are not well known.”

Components of the Mediterranean diet could perhaps improve blood vessel function, fight inflammation, reduce risk for heart disease and repair oxygen-related cell damage. All these functions, in turn may reduce the probability of developing depression.

Sanchez-Villegas further elucidated that, “However, the role of the overall dietary pattern may be more important than the effect of single components. It is plausible that the synergistic combination of a sufficient provision of omega-three fatty acids together with other natural unsaturated fatty acids and antioxidants from olive oil and nuts, flavonoids and other phytochemicals from fruit and other plant foods and large amounts of natural folates and other B vitamins in the overall Mediterranean dietary pattern may exert a fair degree of protection against depression.”

After a median of about 4.4 years of follow-up, nearly 480 fresh cases of depression seemed to have been identified, including approximately 156 in men and 324 in women. The study authors found that those who followed the Mediterranean diet most closely appeared to have more than 30 percent decrease in the risk of depression in contrast to those who had the lowest Mediterranean diet scores. Also, it was observed that the association did not alter when the results were adjusted for other indicators of a healthy lifestyle including marital status and use of seat belts.

The findings of the study have been published in the Archives of General Psychiatry journal.