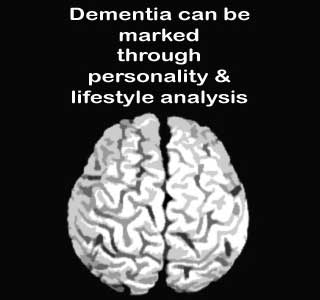 A latest study has discovered that socially active people, who don’t get stressed easily, stand a lower risk of developing dementia. It is estimated that one in seven Americans suffer from a form of dementia.

Around more than 500 older subjects, who didn’t suffer from dementia at the start of the study, were analyzed. These subjects had to answer various questionnaires on their lifestyle and personality traits. These questions were constructed in such a way that the investigators could gauge the subject’s personality and lifestyle. Their different degrees of neuroticism, openness in talking to people, calm and self-satisfied nature, emotional instability, etc. were measured through these questionnaires.

Study author, Hui-Xin Wang, PhD, Karolinska Institute, Stockholm, Sweden, says that, “In the past, studies have shown that chronic distress can affect parts of the brain, such as the hippocampus, possibly leading to dementia, but our findings suggest that having a calm and outgoing personality in combination with a socially active lifestyle may decrease the risk of developing dementia even further.”

The results revealed that people who were not easily stressed were calm and self-satisfied. Quite contrary to this, people who were easily distressed had the straits of being emotionally unstable, negative and nervous. The outgoing people scored more than the introvert people. A follow up of six years was conducted on the subjects. It is stated that during this period, around 144 of the subjects developed dementia.

Wang further says that, “The good news is, lifestyle factors can be modified as opposed to genetic factors which cannot be controlled. But these are early results, so how exactly mental attitude influences risk for dementia is not clear.” A more detailed analysis is required in this field, to provide concrete evidence.

Their study findings are published in Neurology, the medical journal of the American Academy of Neurology.