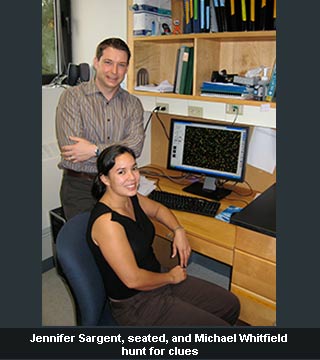 At its most benevolent, the autoimmune disease scleroderma could possibly fade parts of the skin of its sufferers. More so, at its most destructive, it may thicken and harden their skin, blood vessels, and internal organs before, and in many cases, killing them.

In all its forms, scleroderma is believed to have given Dartmouth geneticist, his graduate students, and his postdoctoral researchers a sense of need in their search for the triggers of the chronic condition.

Dartmouth geneticist, Michael Whitfield along with his team was noted to have reported a closer connection between a gene profile for the profibrotic pathway TGF-beta and a tendency in some scleroderma sufferers in order to develop lung problems.

Lead author of the study, Jennifer Sargent, Ph.D. in molecular and cellular biology from DMS, seems to have examined the previously-identified TGF-beta pathway signature in skin biopsies from patients and healthy control subjects from around the country.

The study authors stated that, “The finding that a gene signature expressed in skin is associated with the occurrence of lung disease is surprising and to our knowledge is previously unreported. ILD (interstitial lung disease) is the leading cause of death among patients with dSSc (diffuse systemic sclerosis). Recent work has developed tools and methods for diagnosis, staging, and characterization of ILD in dSSc patients; however, biomarkers that reliably predict who will develop lung complications before they become symptomatic would be beneficial.”

Whitfield, an associate professor of genetics at DMS, in collaboration with M. Kari Connolly, a professor of dermatology at the University of California-San Francisco along with DMS study experts appear to have begun to create a map of skin in order to outline the molecular behavior of genes in scleroderma in 2001.

“Several different pathways likely contribute to the gene expression subsets in scleroderma, and each subset may need to be treated differently. We’re getting inquiries from rheumatologists and companies that are looking at drug trials,” elucidates Whitfield.

In the year 2008, Whitfield’s group along with DMS postdoctoral fellow Ausra Milano as lead author, were noted to have profiled gene expression for the purpose of dividing scleroderma patients into different categories.

Supposedly, those findings prompted Sargent, who participated in the 2008 study, to start mapping the genetic pathways that the disease follows in the subset of patients with the most serious cases.

The findings of the study have been published in the journal of Investigative Dermatology.