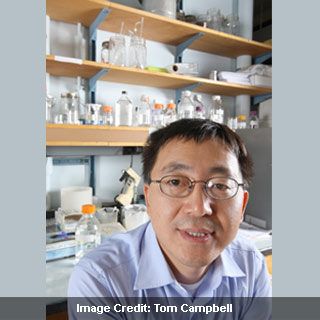 A Purdue University researcher has discovered that the absence of certain proteins required for proper cell duplication may possibly lead to cancer.

Xiaoqi Liu found that cytoplasmic linker protein-170 (CLIP-170) seems to play an essential role in proper cell duplication and DNA distribution. When the protein is removed, cell duplicates may be short of entire copies of DNA. Also, cell duplicates could possibly turn out to be cancerous.

“DNA has to be equally distributed from a mother cell to its daughter cells. If the cells are not identical to the mother cell, they become cancer. Normal cells have a very tightly regulated process to avoid aneuploidy, or the unequal distribution of chromosomes. Aneuploidy is a hallmark of cancer,” explains Liu, an assistant professor of biochemistry.

Before undergoing division, a cell seems to go through two chief processes. Apparently, it will form a second copy of its own DNA. Furthermore, it could possibly create two centrosomes, or poles, that will act as magnets to draw the DNA towards them. When the centrosomes appear to have attracted the DNA, the cell divides in to two identical cells. This process is known as mitosis.

However, it was observed that when CLIP-170 was removed from a cell in Liu’s lab, more than two centrosomes formed, dragging only two copies of the DNA in several directions. Each centrosome was believed to have received less than a full copy of the DNA.

“If there are multiple poles, the cell becomes confused and becomes cancerous or transformed,” says Liu.

Liu also found that a cyclin-dependent kinase called Cdc2 seems to activate CLIP-170 in cells by attaching a phosphate group to the protein.

Liu further stated that, “Without either of these, a cell has an increased chance of becoming a cancer cell.”

Cdc2 is an enzyme which is believed to be the master regulator of cell growth. Moreover, without Cdc2, CLIP-170 fails to carry out its function which leads to the formation of multiple centrosomes.

The findings of the research have been published in the Journal of Biological Chemistry.