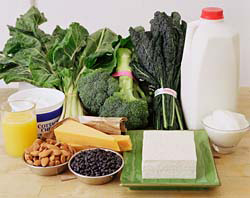 Latest research suggests that food items that are rich in calcium help to strengthen bones better than supplements taken in the form of pills.

Calcium is essential for the prevention of osteoporosis, especially in women after menopause.

The scientists then tested their bone mineral density and urine for levels of oestrogen, a female hormone produced by the ovaries.

The women were then split into three groups – those who got at least 70 percent of their daily calcium from supplements, those who got the same amount from dairy products and other food only, and those who took pills on top of their calcium-rich diet.

The researchers found that although the ‘diet group’ took in the least calcium, an average of 830 mg per day, they had higher bone density in their spines and hipbones than women in the ‘supplement group’ who consumed 1,030 mg per day.

The study published in the American Journal of Clinical Nutrition showed that the ‘diet plus supplement group’ tended to have the highest bone mineral density as well as the highest calcium intake at 1,620 mg per day.

The women in the ‘diet group’ and the ‘diet plus supplement group’ were also found to have higher levels of oestrogen, needed for bone mineral density.

The researchers said that though their study was not definitive, dietary calcium might be better at protecting bone health than calcium that comes mainly from tablets.