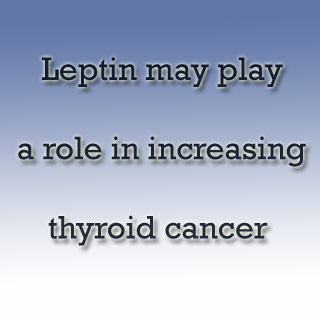 Leptin, a molecule connected with obesity, may play a vital function in foreseeing poor diagnosis from thyroid cancer, at least in the Middle Eastern region of the world. This was claimed by a study which was presented at the American Association for Cancer Research Frontiers in Basic Cancer Research Meeting.

Thyroid cancer is said to be the eighth most common cancer among American women, but apparently it is the second most common in Saudi Arabian women. This high frequency is supposedly seen in all Gulf Council countries.

Al-Kuraya mentioned that there seems to be some proof that thyroid tumors in the Middle East are exclusive on a molecular level, predominantly an augmented intensification of the PIK3CA gene.

For the present study, the experts concentrated on gauging the degree of leptin and its receptor in around 536 human thyroid cancer samples. They discovered overexpression of the leptin receptor in about 80 percent of the cases. This overexpression was considerably linked to poor disease survival.

Likewise, increased leptin receptor expression was connected to older age, bigger tumor size, advanced stage and metastasis. In addition, the experts also performed various in vitro experiments on thyroid cancer cells in the lab and verified that leptin functions on the life process of cancer cells by invigorating growth and averting death.

Leptin is apparently the result of the ‘obesity gene’ and adjusts food intake and energy expenditure. Even though this is claimed to be the first study in which experts have examined its function in thyroid cancer patients, it has formerly been caught up in poor prognosis among patients with gastric, endometrial and breast cancer. Leptin receptor status could be simply evaluated with a fine needle biopsy.