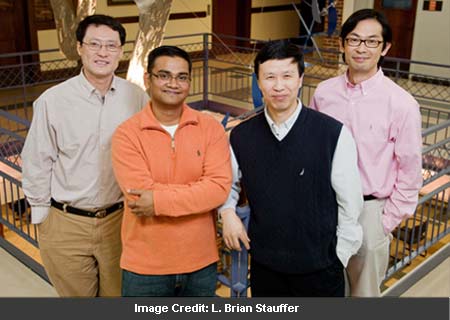 Researchers from the University of Illinois have discovered that applying a small mechanical force to embryonic stem cells seems to have a huge impact on them. Apparently, this force can persuade them into a specific direction of differentiation. Applications for force-directed cell differentiation are known to include therapeutic cloning and regenerative medicine.

Cell softness is known to be an inherent property of embryonic stem cells. Also, it seems to dictate how a cell responds to forces in its physical microenvironment. Those responses are believed to include how strongly the cell attaches to a surface, how far the cell spreads on a surface, and, most astonishingly, whether specific genes are expressed.

In order to examine cellular sensitivity to force, Corresponding researcher, Ning Wang, a professor of mechanical science and engineering at the University of Illinois along with his collaborators were noted to first join a magnetic bead which appears to be of 4 microns in diameter to the surface of a living embryonic stem cell. Then they applied a small oscillating magnetic field, which moved the bead up and down.

The findings of the research revealed that mouse embryonic stem cells seem to be softer and much more responsive to localized cyclic forces as compared to their more advanced, distinguished counterparts.

Wang, who is affiliated with the university’s Beckman Institute, Micro and Nanotechnology Laboratory, and department of bioengineering, stated that, “As stem cells differentiate, they become stiffer. The stiffer the stem cell, the less it spreads under stress.”

The researchers found the same results when they applied cyclic forces to stiff human muscle cells. However, they were observed to have not experimented with human embryonic stem cells. For the purpose of analyzing some of the long-term effects of localized mechanical forces on the behavior of mouse embryonic stem cells, the researchers seemed to have made use of the expression of an enhanced green fluorescent gene. Cells expressing this gene appeared to have flamed fluorescent green when exposed to blue light.

Seeing that, the mechanical force was noted to have been applied in the researchers’ experiments. It was seen that the green fluorescence in cells with magnetic beads seemed to have faded, thereby indicating reduced gene expression. Control cells i.e. without beads continued to glow a few microns away.

Wang was of the opinion that the softness of mouse embryonic stem cells may perhaps be making them very sensitive to localized cyclic forces. He further claimed that if their findings could be extended to early animal embryos, they would be able to provide a latest way of locally differentiating a single cell of early lineage, while leaving nearby cells alone.

The research findings have been published in the online journal of Nature Materials.