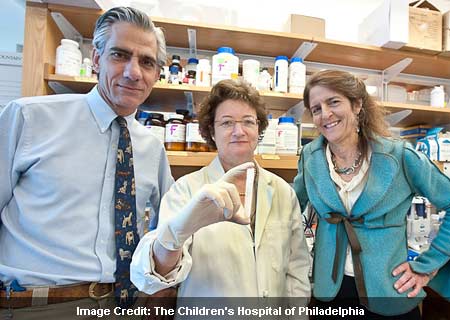 This information may provide some hope to parents with children suffering from congenital blindness. A research conducted at the University of Pennsylvania School Of Medicine and the Center for Cellular and Molecular Therapeutics at The Children’s Hospital of Philadelphia, used gene therapy to carefully enhance vision in about five children and around seven adults with Leber’s congenital amaurosis (LCA).

The maximum progress supposedly took place in the children, all of whom are apparently now able to steer a low-light obstacle course. Even though the patients did not reach normal eyesight, around half of them i.e. 6 of 12 were better enough to no longer be categorized as officially blind.

Katherine A. High, M.D., co-first author of the study and the director of the Center for Cellular and Molecular Therapeutics, the facility that sponsored the clinical trial at The Children’s Hospital of Philadelphia, commented, “This study reports dramatic results in restoring vision to patients who previously had no options for treatment. These findings may expedite development of gene therapy for more common retinal diseases, such as age-related macular degeneration.”

Co-first author Albert M. Maguire, M.D., an associate professor of Ophthalmology at Penn and a physician at Children’s Hospital, mentioned, “Children who were treated with gene therapy are now able to walk and play just like any normally sighted child. They can also carry out classroom activities without visual aids.”

The outcome apparently showed that a child who since birth, could only see light and shadows, looked at his father’s face and mentioned he could observe the color of his eyes. For children and adults in the research, functional improvements in vision supposedly followed single injections of genes that created proteins to make light receptors function in their retinas.

The 12 participants varied in age from 8 to 44 years old during the time of treatment. For the present human trial, the research team utilized a vector, a genetically engineered adeno-associated virus, to transmit a standard version of the gene, known as RPE65 which is alterered in one type of LCA, called LCA2 that is apparently responsible for about 8 to 16 percent of all LCA cases. Jeannette Bennicelli, Ph.D., in Bennett’s laboratory, duplicated the gene. The clinical vector production facility at Children’s Hospital’s Center for Cellular and Molecular Therapeutics (CCMT), directed by Fraser Wright, Ph.D., produced the vector.

In April 2008, the research team had heartening initial results regarding three young adults. Those participants showed progress in their visual function in both objective vision tests and subjective reports by the patients themselves. Patients who could only identify hand movements apparently now had the skill to read lines on an eye chart.

After the first group of three young adults was treated carefully, the research team extended gene therapy to about five children from the United States, Italy and Belgium, plus four other adults. Since animal researches performed by Bennett and colleagues had revealed that visual development was apparently age-dependent, the researchers examined the theory that younger human subjects could obtain superior gains from the treatment.

In all, 12 patients were given gene therapy using a surgical procedure performed by Maguire in October 2007 at The Children’s Hospital of Philadelphia. For every participant, Maguire injected the therapeutic genes into the eye with inferior function. There were three patient cohorts, getting low, middle and high doses. No grave unfavorable procedures took place in any of the test participants.

Starting two weeks post the injections; all 12 subjects accounted for better vision in faintly lit surroundings in the injected eye. An objective measurement, which gauges how the eye’s pupil tightens, demonstrated that all the participants were supposedly able to identify considerably more light post treatment and also showed better light sensitivity in every patient’s treated eye as opposed to the untreated eye. In addition, prior to treatment, nine patients had nystagmus, an uncontrolled movement of the eyes that is ordinary in LCA. Post treatment, around seven of them had noteworthy progress in nystagmus.

Prior to the treatment, it was seen that the patients had immense trouble in evading obstructions, particularly in dim light. Following treatment, the children apparently steered the route more rapidly, with less mistakes than before, even at the least light levels. Not all the adults performed better on the mobility route, and for those who did, the progress was not as much as compared to the children’s.

Maguire mentioned that in follow-up studies, they will continue to monitor these patients to determine whether this treatment stops the progression of this retinal degeneration. In the future, they hope to investigate whether other retinal disease will be amenable to this gene therapy approach.

Can progesterone be effective in treating traumatic brain injuries?