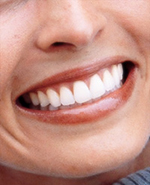 Thinking of sparkling up that smile of yours with at-home tooth-whitening products? If you are unsure whether such a do-it-yourself method would work, then read on. Your pearly whites will get whiter with those whitening products, at least in the short run.

Hana Hasson, DDS, and colleagues reviewed 25 studies on at-home tooth-whitening products, which include those sold in stores and also in dentists’ offices. For the studies, patients used various tooth-whitening gels and strips. For comparison some got placebos, which actually contain no active ingredients.

The studies showed that the tooth-whitening products did what they have promised to do, i.e. make teeth whiter. And as expected, the placebo acted like it had to and did not show results.

Most of studies tracked their patients for up to two or three weeks after treatment. It was found that the most common side effects were mild to moderate tooth sensitivity and gum irritation, especially in products which have high levels of hydrogen peroxide. The reviewers noted that these side effects might fade away after people stop using the products.

The bottom line of the whole study: “over-the-counter- or dentists-dispensed tooth-whitening products can be recommended to the public but with strong cautions.”