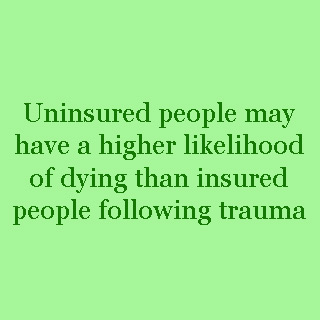 About 45.7 million Americans did not have health insurance in 2007. This was mentioned as per background information.

The authors commented, “Uninsured patients currently face health-related disparities in screening, hospital admission, treatment and outcomes. Uninsured adults have a 25 percent higher risk of mortality than insured adults, accounting for approximately 18,000 deaths per year in excess. Evidence regarding the effects of lack of insurance on traumatically injured patients suggests that they are at added risk.”

Data from National Trauma Data Bank, which includes details from about 2.7 million patients admitted for traumatic injury in more than 900 U.S. trauma centers, were examined by Heather Rosen, M.D., M.P.H., of Children’s Hospital Boston and Harvard Medical School, and colleagues. Demographic, medical history, injury severity, outcomes and charges were supposedly evaluated from about 6, 87,091 patients who are 18 years and older were admitted between 2002 and 2006. They are split into five insurance groups i.e. uninsured, a managed care organization, commercial indemnity insurance, Medicare or Medicaid.

By and large, it was seen that uninsured patients apparently had the maximum rate of death post admission for trauma, even after controlling for age, sex, race and severity and mechanism of injury. An investigation of patients from age 18 to 30 were chosen since they were supposedly less expected to have co-occurring illnesses, exposed that uninsured patients in this group apparently still had the top likelihood of death. The same was apparently correct in a sub-analysis of only patients with head injuries and in another study of those with one or more co-occurring illnesses.

The authors observed that lack of insurance could augment the threat of death post trauma in numerous ways. Uninsured patients may undergo treatment delay, obtain dissimilar care, counting less diagnostic tests; or have a lesser rate of health literacy.

The authors remarked, “Most recent research has concentrated on decreased (or lack of) access to care as a result of being uninsured. However, we found that, even after admission to a hospital, trauma patients can have worse outcomes based on insurance status. This concerning finding warrants more rigorous investigation to determine why such variation in mortality would exist in a system where equivalent care is not only expected but mandated by law.”

The authors quoted, “In addition, treatment often is initiated before payer status is recognized; thus, this provokes the question of whether differences exist in processes of care during the hospital stay. We can only speculate as to the mechanism of the disparities we have exposed; the true causes are still unclear.”

The authors concluded by mentioning that although the lack of insurance may not be the only explanation for the disparity in trauma mortality, the accidental costs of being uninsured in the United States today may be too high to continue to overlook.

The study was published in the Archives of Surgery, one of the JAMA/Archives journals.

Is a vitamin pill essential?