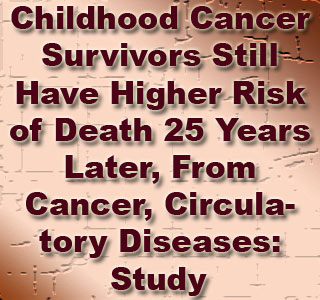 Fighting against a dreaded disease like cancer in childhood requires courage, but even after overcoming the disease in childhood there seems to be no end to the ailment. Experts conducting a follow-up on British childhood cancer survivors reveal that after more than 25 years of cancer diagnosis, such individuals face an elevated risk of death from second primary cancers, cardiac and cerebrovascular causes. It may still be unclear if heightened mortality risks continue after 25 years from initial cancer diagnosis.

The initiated follow-up analyzed long-term cause-specific mortality among 17,981 individuals who were 5-year survivors of childhood cancer. Between 1940 and 1991 all these individuals were diagnosed with cancer before age 15 years in Britain and followed up until the end of 2006.

The scientists elucidate, “Over recent decades survival from childhood cancer has improved dramatically, yet mortality rates in childhood cancer survivors continue to be elevated for many years beyond 5-year survival compared with the general population. Although studies have shown that the risk of death from recurrence decreases with increasing time since 5-year survival, uncertainty about the long-term risks of death from other causes remains. Investigations into long-term cause-specific mortality are important because any excess mortality may be related to long-term complications of treatment.”

The analysis under the guidance of Raoul C. Reulen, Ph.D., of the University of Birmingham, England, and colleagues, registered 3,049 deaths during the study period. It was noted that the survivors face 11 times the number of deaths expected from the general population with 10.7 as a standardized mortality ratio [SMR]. Although the SMR declined with follow-up, 3-fold higher than expected 45 years from diagnosis was ascertained.

The authors affirmed, “Second primary cancers are a recognized late complication of childhood cancer, largely due to exposure to radiation during treatment, but specific cytotoxic [toxic to cells] drugs also have been implicated in the development of second primary cancers.”

Diagnosis at the age of 5 to 14 years to beyond 45 years from identification of the disease probably declined the absolute excess risk (AER) for deaths from recurrence. But at the same time of the follow-up, the AER for deaths from second primary cancers and circulatory disease like from cardiac and cerebrovascular deaths seemingly heightened.

After 45 years the survivors reported to have 3.6 times the number of deaths expected from the general population for a second primary cancer. Almost 26 percent of all excess deaths beyond 45 years from diagnosis were claimed to be due to circulatory disease.

The experts remarked, “These findings confirm the importance of very long-term outcome data and that survivors should be able to access health care programs even decades after treatment. Finally, the principal clinical message from these data is straightforward; 77 percent of the excess number of deaths observed among those surviving beyond 45 years from diagnosis of childhood cancer in Britain are due to second primary cancers and circulatory deaths. Finding ways to successfully intervene to reduce these potentially preventable premature deaths will be complex.”

The second primary cancers and circulatory deaths apparently comprised 77 percent and more that 45 years from diagnosis, recurrence accounted for 7 percent of the excess number of deaths. The investigators enlightened that the excess mortality because of second primary cancer and circulatory disease could be due to late complications of treatment.

The study is published in the July 14 issue of JAMA.