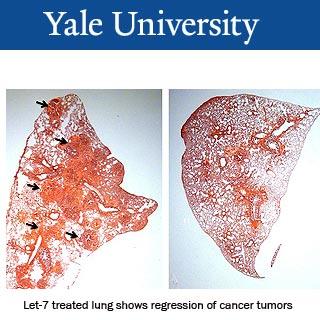 The progress of lung tumors in mice claims to have been reversed by utilizing naturally occurring tumor suppressor microRNA. Researchers from Yale University and Mirna Therapeutics, Inc suggest that the tiny RNA let-7 could have a large impact on lung cancer tumors.

The novel finding could offer hope to future patients fighting lung cancer. A very small bit of RNA, the experts reveal could one day play a significant role in future cancer treatment. Lung cancer is considered to be one of the most prevalent and difficult to treat cancers.

“This is the first time anybody has shown a positive effect of microRNAs in shrinking lung cancer,” commented Frank Slack, Ph.D., co-senior author of the paper, researcher at the Yale Cancer Center and professor of molecular, cellular & developmental biology.

After the Yale team administered an intranasal dose including a type of micro-RNA called let-7, the tumors in mice with non-small cell lung cancer appeared to have shrunk. Tiny bits of genetic material, microRNAs are often linked to transmission of information encoded in DNA. Supposedly they also have been found to play essential parts in gene regulation and/or gene silencing.

Mice without let-7 were observed to have developed cancer. This, the Yale team may support their hypothesis of microRNAs acting as a tumor suppressor. It was further found that mice who received let-7 did not show elimination of tumors but a reduction of 66 percent. Slack observed that let-7 may be absent in many cancers and could act upon a gene that is known to play a role in about a quarter of all human cancers.

“We hope it will be valuable in the treatment of many other forms of cancer,” he mentioned.
Presently, the team is examining whether let-7 therapy in combination with chemotherapy and radiation could encourage complete remission.

The research has been published in Dec. 7, 2009 issue of the journal Oncogene.