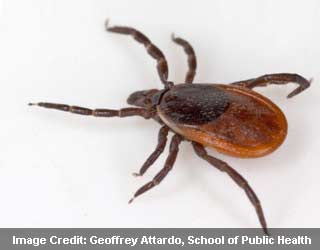 A new tick-borne bacterium that could be causing disease in the United States and other places is claimed to have been discovered by Yale researchers along with Russian scientists. Apparently, the new disease may be caused by a spirochete bacterium named Borrelia miyamotoi. The latter is known to be a distant relative of the Borrelia burgdorferi bacterium, responsible for Lyme disease.

The newly found spirochete has been known earlier from ticks in Japan along with deer ticks in Connecticut in 2001. The role of this bacterium in causing human diseases though was unknown. What’s more since then, the bacteria is said to have been uncovered in virtually all species of ticks having the ability to spread Lyme disease all through the U.S. and Europe.

The new spirochete was discovered by Yale professor of epidemiology Durland Fish and colleagues in collaboration with a Russian medical team investigating tick-borne diseases. The researchers compared the symptoms of the disease in patients who had been infected by the new spirochete in Russia and patients from the U.S. suffering from Lyme disease.

“This is the first time we will have a chance to identify a new tick-borne disease in the United States based upon evidence that the agent occurs in ticks,” mentioned Fish, co-author of the paper and co-investigator on the NIH grant along with Peter Krause, a senior research scientist in the Division of Epidemiology of Microbial Diseases.

According to the investigators, a characteristic of the new disease is high fever, having a tendency to relapse minus any treatment. It could thus be mixed up with Lyme disease. Thought, presently there are no diagnostic tests available, Yale researchers reveal to have attained a grant from NIH for the same. They are looking towards developing a diagnostic test procedure that will help find new disease cases in the U.S.

B. miyamotoi in about 2 percent of the deer ticks in the Northeast and Upper Midwest have reportedly been found. Thereon, the scientists have been conducting experiments with mice infected when fed upon by deer ticks in the laboratory. Considering bites from deer ticks has apparently caused over 25,000 Lyme disease cases each year, as per the CDC, the Yale team intends taking their investigation a step forward. They are preparing to find if B. miyamotoi caused any infection in the United States.

Their findings appear in the journal Emerging Infectious Diseases.