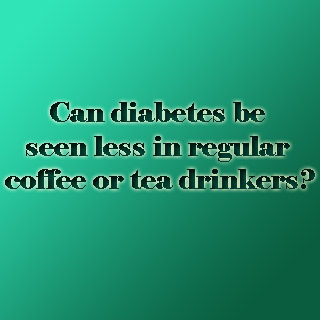 Just sometime back in an earlier article we had reported that coffee consumption could lead to reduced risk of developing prostate cancer. Now a new study claims that people who consume more coffee, regular or decaffeinated or tea seem to have a lesser danger of developing type 2 diabetes.

By the year 2025, it is estimated that around 380 million people all over the world could suffer from type 2 diabetes. This was provided as background information.

The authors commented, “Despite considerable research attention, the role of specific dietary and lifestyle factors remains uncertain, although obesity and physical inactivity have consistently been reported to raise the risk of diabetes mellitus.”

A formerly published meta-analysis supposedly proposed that consuming more coffee could be associated with a decreased danger, but the quantity of accessible information has apparently more than doubled since.

Around 18 studies with around 4,57,922 participants were included in the study by Rachel Huxley, D.Phil, of The George Institute for International Health, University of Sydney, Australia, and colleagues. The study authors supposedly evaluated the link between coffee drinking and diabetes risk. These 18 studies were said to be published between 1966 and 2009.

When the experts merged and assessed the information, they apparently discovered that every supplementary cup of coffee drunk in a day appears to be connected with a 7 percent drop in the surplus threat of diabetes. It was also seen that people who supposedly consumed around three to four cups each day seemed to have a roughly 25 percent lesser risk as compared to those who drank between zero and two cups per day.

The authors remarked, “That the apparent protective effect of tea and coffee consumption appears to be independent of a number of potential confounding variables raises the possibility of direct biological effect.”

The authors noted that due to the link between decaffeinated coffee and diabetes risk, the alliance seems to be doubtful to be exclusively connected to caffeine. Other compounds in coffee and tea counting magnesium, antioxidants called lignans or chlorogenic acids could be implicated.

The authors quoted, “If such beneficial effects were observed in interventional trials to be real, the implications for the millions of individuals who have diabetes mellitus, or who are at future risk of developing it, would be substantial. For example, the identification of the active components of these beverages would open up new therapeutic pathways for the primary prevention of diabetes mellitus.”

The authors concluded by mentioning that it could also be envisaged that they will advise their patients most at risk for diabetes mellitus to increase their consumption of tea and coffee in addition to increasing their levels of physical activity and weight loss.

The study was published in the Archives of Internal Medicine, one of the JAMA/Archives journals.