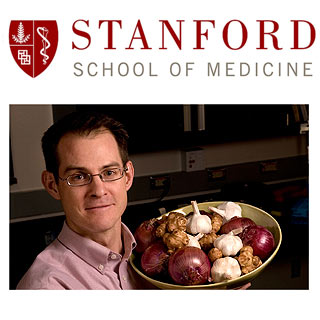 New high-powered genomic analytical methods have revealed that approximately 1000 different single-celled species co-exist in every healthy human gut. Experts from the Stanford University School of Medicine discovered that identifying a small set of bacterial genes present in the human gut will permit them to examine how bugs respond to a diet change.

Experts added a complex carbohydrate inulin to the mice’s diet. This carbohydrate is mainly found in specific bulbous plants namely onions, garlic and Jerusalem artichokes.The Microbial ecosystem in every individual is distinct in its composition with potential implications for our health. Distorted intestinal microbe distributions have been related to disorders namely inflammatory bowel disease, colorectal cancer and obesity.

Justin Sonnenburg, PhD, assistant professor of microbiology and immunology at the Stanford University School of Medicine shares, “For each human cell in your body there are 10 microbial cells, most of them living in the gut and helping us digest things we can’t digest on our own. In turn, what you eat is proving to be one of the major determinants of the components of your ‘inner self’ that community of bacteria living in your intestine.”

Scientists anticipate that in the future they may be able to manipulate microbial populations present in the gut as a medium of treating disease and improving health. Taking genomic censuses to classify and count the interacting components of every individual’s bacterial community gets them one step closer to their goals. They also observe how they respond to interventions such as alterations in the diet. This task is tedious as the overall gene count of all the micro-organisms residing in a typical human gut are a hundred fold as compared to the 20,000 human genes that have been recognized.

Findings highlight the potential of the growing new field of prebiotics which includes adding substances to the diet mainly to transfer the mix of bugs in our gut towards a healthy direction. Experts used simplified model of the internal mammalian microbial ecosystem. This was mainly done to reveal that they can seemingly predict by observing a mere handful of microbial genes how a change in diet can modify the microbial composition of the gut.

Scientists introduced two different species of bacteria into mice that had been raised in a sterile environment and therefore lacked the normally resident microbes, also known as germ-free mice. Both these species of bacteria thrived on the human digestive tract. They further fed the mice a diet rich in a particular complex carbohydrate. This one bacterial specie seemed genetically better prepared to digest that were based on the presence of a small set of genes in its genome. These bacterial species increased mostly in the mice’s intestines.

Findings help experts for scaling up germ-free mice into living laboratories. Scientists could introduce large numbers of bacteria one by one in the human intestine. This would finally help in a refined understanding of the surprisingly complex microbial super organism that is present among each one of us. Experts revealed that we humans are incapable of digesting inulin of their own however some bacteria are equipped with genes that encode enzymes that are capable of passing through the chemical links joining this substance’s constituent sugar molecules.

Sonnenburg comments “Think of these enzymes as a unique set of utensils that allow them to eat this food we can’t cut”.

The byproducts of bacterial metabolism are important nutrients for humans. Former genomic analyses had highlighted that only one among the two bacterial species introduced in the germ-free mice among approximately 5000 genes which allowed inulin to fragment.

Erica Sonnenburg, PhD, senior study scientist in Justin Sonnenburg’s lab and first author of the study shares, “We’ve now got germ-free mice to which we’ve introduced batches of bacteria representative of an entire human gut community in all its complexity. We’re looking to see if the bugs that we think should do better actually do better in this more competitive environment.”

In order to identify changes in the two species, experts used a standard laboratory technique. These observations were made before and after dietary inulin supplementation. They noticed an important change within the first two weeks in the composition of the mice’s gut communities. The ratio of inulin-digesting to non-digesting species moved in favor of the former among inulin-fed mice.

Scientist’s share that it will take some time before the findings in this simple experiment can be tried on nearly 1,000-species at large that is the real, human gut-dwelling microbial community. By increasing the number of human-associated bacteria into germ-free mice will augment the complexity of this experimental system. These mice have been humanized so that their intestines contain a microbial activity alike the human gut.

These findings were published in June 25, 2010 journal of the Cell.