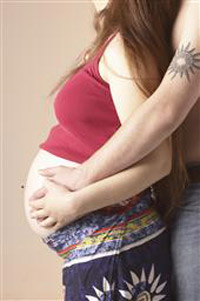 A study has shown that men really do suffer pregnancy symptoms in sympathy with their partners. They feel the pain and endure cramps, back pain, mood swings, food cravings, morning sickness, tiredness, depression, irritability, fainting and toothaches, say researchers.

It may sound unbelievable, but some men develop swollen stomachs that look like a “baby bump”. According to the study, the longer the pregnancy goes on, the worse men’s symptoms get.

For the study, a group of 282 expectant fathers aged 19 to 55 were monitored throughout their partners’ pregnancies by specialists at St. George’s University of London.

The findings of the study were compared to a control group of 282 men whose partners were not pregnant. It was found that they did not experience any of the above mentioned symptoms.

Among the group of men who partners were pregnant, it was found that stomach cramps were the most common complaint.

The study’s author, Dr Arthur Brennan of the University of London’s Faculty of Health and Social Care Sciences, said: “Some people may perceive this as men trying to get in on the act but far from being attention-seeking, these symptoms are involuntary.

“Often the men haven’t got a clue about what’s happening to them. Doctors don’t recognize Couvade Syndrome. There’s no medical diagnosis.

“Yet this research proves that Couvade Syndrome really exists – the results speak for themselves.”

Dr. Val Collington, the head of the school of midwifery at St George’s, said the results matched her experience.

She said: “Midwives might not be surprised at these findings. One midwife told me that, in her experience, men often complain of nausea during the early stage of their partner’s pregnancy.”