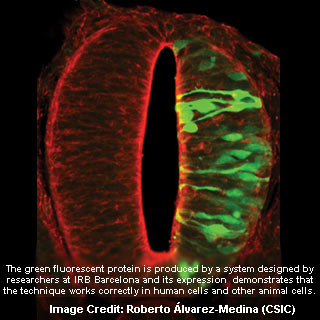 Cells appear to gather excessive errors in the proteins they produce leading to the activation of apoptosis which is mainly a cell suicide programme. However ahead of this, they first attempt to correct the problem via a number of rescue responses.

Pertaining to this, researchers at the Institute for Research in Biomedicine (IRB Barcelona) claim to have fabricated a tool that would probably encourage controlled suicide in human cells. The novel tool, the scientists suggest could help them in acquiring in depth information about rescue signalling pathways and cell suicide.

Until now, experts have only been able to identify the general outline of the mechanisms behind cellular ‘stress responses’ along with the interactions between them and involved molecular components as well. Now, this innovative tool should allow scientists to evaluate the stress responses used by cells to solve genomic errors. It may also aid in the identification of targets of therapeutic interest.

“We have developed a strategy to induce controlled mutations in the cell, which allows us to gradually activate several repair systems that are triggered before the cell enters the cell death programme. Using previous methods, the effects on cells are less specific and may lead to parallel responses that hinder analysis of the results”, reveals the author of the article, Lluís Ribas de Pouplana, ICREA researcher and head of the Gene Translation Laboratory at IRB Barcelona.

“We have developed a strategy to induce controlled mutations in the cell, which allows us to gradually activate several repair systems that are triggered before the cell enters the cell death programme,” he further explains.

Conventional methods for this include exposure of the cells to drug or compounds that could affect protein production, consequently generating instability.

Ribas recalls that Renaud Geslain, a researcher in Ribas’ group and first author of the article, ‘had a brilliant idea to reproduce the same effect within the cell, without the help of compounds alien to the cell’.

Geslain seems to have manipulated a component of the cellular protein synthesis machinery that resulted in the production of defective proteins.

“In response to the accumulation of misfolded proteins, the cellular alarm systems are switched on and stress responses are activated. Given that this approach affects all the proteins, we obtain all the reactions possible, not only responses that could be exclusive to one or a few affected proteins,” Ribas adds.

Transfer RNA (tRNA) was identified as one of the components that could be involved in protein production. Transportation of the protein synthesis machinery and the accurate amino acids needed for each protein under construction appears to be the main function of tRNA. With that in mind, Geslain supposedly tailored new tRNAs that were closely identical to natural ones. The only difference being that they seemingly placed erroneous amino acids into the protein sequences under construction.

The researcher mentions, “When these tRNAs are introduced, the cells starts to make and accumulate defective proteins and it reacts in response. Given that the cell still conserves the healthy proteins present before the introduction of our tRNA, we can observe the extent to which the healthy part can correct the problem. We can also see when these defects are no longer correctible and how and when cells enter the suicide programme.”

The scientists claim to be aware of which modification they introduce into the protein synthesis system. They can apparently also measure the cellular responses to the error produced. While more serious mutations could trigger cell suicide in less than 48 hours, less severe ones were observed to allow survival of the cell for 5 days.

“Thus we can observe the whole spectra of cell responses triggered and measure when they begin and the connections between them. Finally, by means of transcriptomics studies, we can identify new components involved in this process. We still don’t know what they do or what genes they repress but we are discovering very surprising functional connections”, notes the IRB Barcelona researcher.

He continues, “The biological problem that we induce in the cell is directly linked to neurodegenerative diseases such as Alzheimer’s, Parkinson’s and Huntington’s, which are caused by the aggregations of misfolded proteins that cause neuronal death”.

Currently, the lab has started obtaining results armed with this new tool. Analyses suggest that part of the cell response to the accumulation of misfolded proteins could be the production of many micro-RNAs. The IRB Barcelona developed tool should enable scientists to identify new components of the response mechanisms to these mutations. It is these components that could probably become targets for intervention in not only these but other diseases also in the near future.

The last issue of the specialized Journal Nucleic Acids Research, included in the group Oxford Journals includes a description of this method.