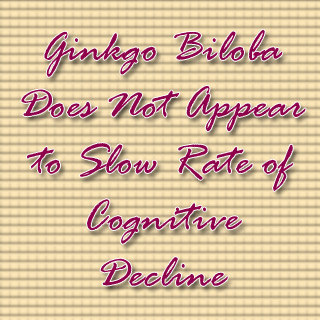 A new study sheds light on the effects of the herbal supplement Ginkgo biloba. Apparently older adults who used the supplement for many years did not show a slower cognitive decline rate as against adults who received placebo.

“Ginkgo biloba is marketed widely and used with the hope of improving, preventing, or delaying cognitive impairment associated with aging and neurodegenerative disorders such as Alzheimer disease,” the authors reveal. “Indeed, in the United States and particularly in Europe, G biloba is perhaps the most widely used herbal treatment consumed specifically to prevent age-related cognitive decline.”

Nevertheless, evidence from large clinical trials about its effect on long-term cognitive working seems to be missing. To better understand this, the researchers evaluated if G. biloba slowed the rate of cognitive decline in older adults who had normal cognition or mild cognitive impairment (MCI) at the beginning of the study. For this, Beth E. Snitz, Ph.D., of the University of Pittsburgh, and colleagues examined results from the Ginkgo Evaluation of Memory (GEM) study.

Earlier, the GEM study claimed to have discovered that G biloba was not effective in lowering the incidence of Alzheimer dementia or dementia overall. Interestingly, the randomized, double-blind, placebo-controlled clinical trial comprised of 3,069 community-dwelling participants, aged 72 to 96 years. They received a twice-daily dose of 120-mg extract of G biloba (n = 1,545) or identical-appearing placebo (n = 1,524).

The study was supposedly carried out at six academic medical centers in the U.S. from 2000-2008. It had a median follow-up of 6.1 years. Various tests and measures were used to assess the changes in cognition. The study is claimed to be the largest randomized controlled trial of G biloba to report on outcomes to date.

“In sum, we find no evidence that G biloba slows the rate of cognitive decline in older adults. These findings are consistent with previous smaller studies examining prevention of decline and facilitation of cognitive performance and with the 2009 Cochrane review of G biloba for dementia and cognitive impairment,” concluded the authors.

The experts claim to have found no evidence for an effect of G biloba on global cognitive change. They also seemed to have got no evidence of effect on specific cognitive domains of memory, language, attention, visuospatial abilities and executive functions. Besides, no evidence for differences in treatment effects by age, sex, race, education or baseline cognitive status that is MCI vs. normal cognition were reported.

The study is published in the December 23/30 issue of JAMA.