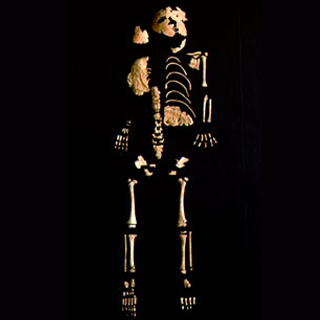 A research from the University of Bristol claims that the teeth of 30,000-year-old child are apparently throwing new light on the evolution of modern humans. The teeth are said to be an element of the extraordinarily absolute remains of a child discovered in the Abrigo do Lagar Velho, Portugal. It was unearthed in 1998-9. This project was headed by Professor Joao Zilhao of the University of Bristol.

The child is graded as a modern human having Neanderthal ancestry. The remains of the child supposedly brings up controversial queries about how widely Neanderthals and modern human groups of African descent apparently interbred when they came to Europe.

Bearing this in mind, an international team, counting Professor Zilhao, apparently reanalyzed the dentition of the Lagar Velho child to observe if the teeth looked similar to that of Neanderthals, later Pleistocene humans and modern humans.

By means of a method known as micro-tomography which utilizes x-rays to generate cross-sections of 3D-objects, the scientists apparently examined the virtual stages of development of the budding teeth and the percentages of crown enamel, dentin and pulp in the teeth.

Professor Zilhao commented, “This new analysis of the Lagar Velho child joins a growing body of information from other early modern human fossils found across Europe (in Mladeč in the Czech Republic, Peştera cu Oase and Peştera Muierii in Romania, and Les Rois in France) that shows these ‘early modern humans’ were ‘modern’ without being ‘fully modern’. Human anatomical evolution continued after they lived 30,000 to 40,000 years ago.”

They discovered that for a known stage of growth of the cheek teeth, the front teeth were said to be comparatively belated in their amount of formation. Furthermore, the front teeth appeared to have a bigger amount of dentin and pulp but proportionally less enamel as opposed to the teeth of recent humans.

The teeth of the Lagar Velho child is said to consequently correspond to the pattern obvious in the earlier Neanderthals. It is said to differ with the teeth of later Pleistocene humans and recent modern human beings.

The research was published in PNAS.