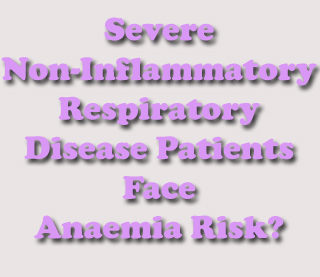 It now seems that chronic obstructive pulmonary disease is associated with anaemia. A recent study claims that patients suffering from severe non-inflammatory respiratory disease have a significant threat of developing anaemia. The study findings apparently have major implications in the medical terrain.

“The results indicate that anaemia is a regular phenomenon in severe respiratory disorder, not just as a result of systemic inflammation. We believe our findings underline the importance of clinicians being aware of the high prevalence of anaemia in respiratory disease and the need to regularly check potential nutritional deficiencies in these patients. Further research is needed to determine whether treatment for anaemia will prove beneficial in respiratory disease,” added lead author Dr Florian Kollert from the Department of Rheumatology and Clinical Immunology, University Medical Centre, Freiburg, Germany.

It was pointed out that patients had higher chances of having anaemia if they were older, had a number of other health problems and poor nutrition. So anaemia may have triggered due to multiple factors in these patients. Men with obstructive disease reportedly were more than twice as likely to have anaemia as women with the same condition. Anaemic patients with obstructive disease apparently were almost five years older than those without anaemia and had higher rates of coronary heart disease, cardiac arrhythmia and diabetes mellitus.

Such patients may also have a lower BMI along with lower total protein levels than patients without anaemia. Participants with restrictive disease and anaemia presumably were older and had half a lower white blood cell count.

The study appears in the April issue of IJCP, the International Journal of Clinical Practice.