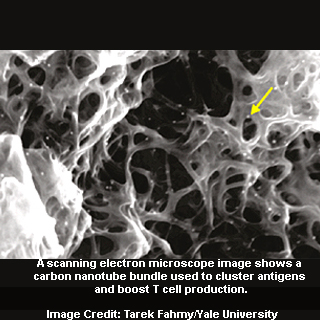 This news seems to provide details about the probable association between carbon nanotubes and cancer-fighting cells. Yale University engineers have discovered that the faults in carbon nanotubes apparently cause T cell antigens to collect in the blood and fuel the body’s natural immune response. Their findings could perk up present adoptive immunotherapy, a treatment supposedly used to increase the body’s capability to battle cancer.

Adoptive immunotherapy seemingly includes drawing out a patient’s blood so that the amount of naturally occurring T cells may replicate more efficiently in the laboratory. Even though the body generates its own tumor-fighting T cells, they are said to be frequently repressed by the tumor and are too few to be effectual. Scientists apparently augment the generation of T cells outside the body by means of diverse substances that appears to promote T cell antigens to gather in high concentrations. The better these substances are at bunching T cell antigens, supposedly the better the immune cell proliferation. Once sufficient T cells are generated, the blood is believed to be shifted back into the patient’s body.

The Yale team had formerly accounted the unforeseen effect that carbon nanotubes seem to encompass on T cell production. They discovered that the antigens, when presented on the surface of the nanotubes, fueled T cell response far more efficiently as compared to covering other substrates like polystyrene in the antigens, although the entire quantity of antigens used stayed the same. Now they have seemingly discovered the real cause behind the augmented stimulation. They discovered that the antigens bunch in high concentrations around the minute defects seen in the carbon nanotubes.

Present adoptive immunotherapy apparently takes weeks to generate adequate T cells, but lab tests appear to illustrate that the nanotubes manufactured the same T cell concentration in only one-third the time. Now the team may work on a way to efficiently eliminate the carbon nanotubes from the blood before it is given back to the patient.

The study was published in the journal Langmuir.