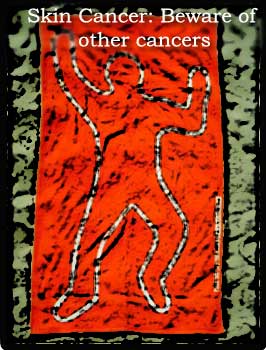 A recent American study reveals a distinct association between skin cancer and other malignancies. It asserts that development of non-melanoma cancer in people also increases their chances of developing other forms of cancer in later stages of life.

People with non melanoma skin cancer are twice as likely to develop another form of cancer later on, according to the researchers. They further reveal that the risk is far more prominent in younger people indicating that a history of non-melanoma skin cancer puts people at a higher risk of other general cancers.

“It seems like non-melanoma skin cancer, even though it is a non-fatal disease, may be a warning sign for increased risk of other, more serious cancers. That’s not just cancer related to melanoma or other skin cancers”, mentioned lead author of the study, Anthony Alberg, a researcher at the Medical University of South Carolina in Charleston.

For the research, an analysis of 769 patients with non-melanoma skin cancer and 18,405 people without skin cancer was carried out over a period of 16 years. Researchers found more than twice the normal risk of developing another form of cancer in patients with non-melanoma skin cancer. They additionally found younger subjects between the ages of 25 to 44 years who had been diagnosed with skin cancer had a 2.6 times higher susceptibility to develop another type of cancer. The cancers that had a higher risk were namely lung cancer, colon and breast cancer.

The researchers however unveiled many downfalls of the study which included patients from a single country and possible surveillance bias caused by the fact that patients with a history of non melanoma skin cancer receive more medical attention.

The study brings to light the need to protect your skin all the more. This report is presented online in the Journal of the National Cancer Institute.