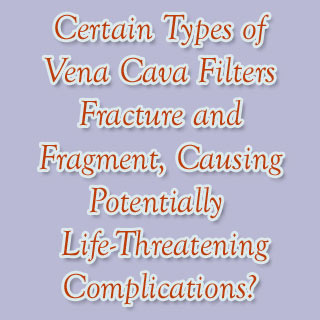 Patients who suffer from blood clots entering their lungs may often be subjected to a vena cava filter. Though it can restrict clots, the filter seemingly ends up creating life-threatening consequences. Investigators claim that two particular types of vena cava filters fracture inside the body and some fractured fragments migrate towards the heart posing deadly complications.

The standard therapy for patients with such blood clots is anti-clotting medications. But while some are unable to take these drugs, others report to continue developing clots in spite of the medications. These patients may be recommended to employ a vena cava filter. During the procedure, the device is placed in the vena cava which is the large vein returning blood to the heart from the lower body. The filter is then believed to trap the blood clots before they travel to the lungs. However, a number of complications including erosion through the wall of the vena cava, along with migration, obstruction and additional clotting of the filter may be linked to this device.

The Bard Recovery filter was a device with two levels of six radially distributed ‘arms’ and ‘legs’ that anchor the filter to the vein and trap any clots. But in some cases these arms and legs apparently broke off. So in order to boost its resistance to fracture, a novel Bard G2 cava filter was inserted in more than 65,000 patients from September 2005 onwards. Having followed one initial case of a fractured filter, experts initiated the study.

189 patients who were included in the study were examined by William Nicholson, M.D., of York Hospital, York, Penn., and colleagues. Between April 2004 and January 2009 these patients had previously been subjected to Bard Recovery or a Bard G2 vena cava filter. Among the group of all the participants one was expecting, 35 no longer survived and 10 had their filter removed. 80 patients went through fluoroscopy to obtain the complete potential of the device. Patients who reported their filter to be fragmented had to undergo echocardiography and cardiac computed tomography.

Scientists allege, “It is essential that patients and their treating physicians be educated about this previously underrecognized and potentially life-threatening complication of these devices. Armed with this knowledge, educated patients can be alert to the presence of pleuritic chest pain and other symptoms that should prompt immediate evaluation. Such early awareness and evaluation could certainly be life saving. In addition, the propensity for filter fragmentation may be directly related to the duration of implantation. Patients and their physicians should be educated about this fact so that they have the opportunity to consider having the filter removed.”

From the total of 13 of 80 patients which formed 16 percent, had at least one arm or strut fracture possibly from their filter. The 13 patients comprised seven of 28 that were 25 percent filters that fractured and migrated within the vein. These patients were provided with the first-generation Bard Recovery filter. With seven cases forming 71 percent, around five registered at least one fragment traveled to the heart. Three among them were suffering from probably life-threatening symptoms of rapid heartbeat or fluid buildup around the heart. And one patient was unable to survive.

It was ascertained that the Bard G2 filter was altered to decrease such occurrences. Yet 12 percent which were six of 52 implanted with Bard G2 filters also seemed to endure fracture. In two of these six cases, investigators revealed that the fragment blocked blood flow in one vein leading from the liver and the other in the lungs. In another four patients, the fragments appeared to remain close to the filter .

The study will be published in the November 8 print issue of Archives of Internal Medicine, one of the JAMA/Archives journals.