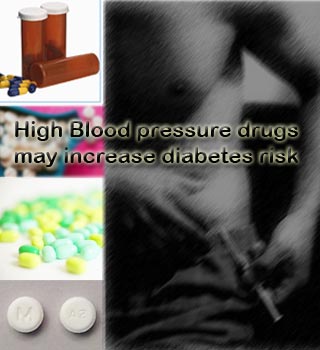 If you suffer from hypertension, you need to watch your medications. The latest study by researchers in the UK indicates that a widely used class of medicines prescribed for high blood pressure like atenolol, inderal and metaprolol could pose a major risk of diabetes.

Dr Anoop Misra, director and head (diabetes and metabolic diseases) Fortis Hospitals, mentioned, “In patients with hypertension, beta blocker drugs are no longer frontline therapy. These drugs may not only increase blood sugar levels in those who don’t have diabetes, but may worsen sugar control in those with diabetes and also blunt warning symptoms when low sugar occurs.”

Carried out at National Heart and Lung Institute, Imperial College, London, the study examined 19,257 hypertensive patients. They were randomly assigned to receive one of the two antihypertensive regimens using beta blockers. Among them, 14,120 were at a risk of developing diabetes while 1,366 (9.7%) subsequently developed NOD during median follow-up of 5.5 years.

The study infers that these beta blocker drugs may enhance blood sugar in patients suffering from diabetes. In some cases, it could also lead to the onset of the disease among patients of blood pressure. In patients with hypertension, the research may help in diagnosis of baseline predictors in diabetes that has been newly onset.

Dr. Misra however added further that even with the risks, these drugs may be useful in patients of diabetes and hypertension with associated heart disease. He revealed that some newer beta blocks may have certain advantages over the previous generation drugs.

The findings conclude that diabetes risk is highly increased among patients with high blood pressure due to the use of such beta blockers. The study has made physicians restrict administration of beta blockers among diabetics and patients of hypertension.