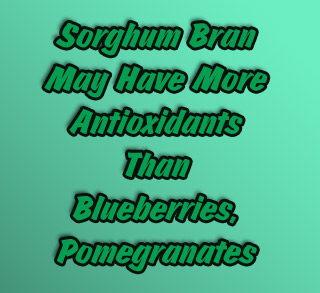 Fruits like blueberries and pomegranates are known to be useful for their antioxidant and anti-inflammatory properties. Well it now seems that sorghum bran too is loaded with such properties. A latest research initiated by the University of Georgia claims that specific varieties of sorghum bran have greater antioxidant and anti-inflammatory properties than blueberries and pomegranates. Having calculated that polyphenolic compounds it was revealed that the black and sumac varieties of sorghum have high levels of antioxidants.

This sorghum bran which naturally occurs in plants may be beneficial in fighting pests and disease. Though polyphenolic compounds are presumably available in most fruits, sorghum bran is not only the richest but also the cheapest source. In the process of the experiment, researchers measured the degree to which extracts from four different varieties of sorghum decreased inflammation in mice. It was observed that polyphenolic content and antioxidant levels were extremely high in black and sumac varieties as compared to two low-tannin varieties. These low-tannin varieties were apparently unable to decline inflammation in mice.

Diane Hartle, director of the UGA Nutraceutical Research Laboratory, an associate professor in the College of Pharmacy and co-investigator remarked, “Since most human chronic disease states are associated with chronic inflammation and high oxidative stress, a food ingredient such as sorghum bran could potentially make certain processed foods better for a healthy diet.”

Experts noted that the levels of polyphenolic compounds in the high-tannin sorghum varieties ranged from 23 to 62 mg of polyphenols per gram. On the other hand, these compounds were around 5 mg of polyphenolics per gram in blueberries and 2 to 3.5 mg per gram in pomegranate juice. Scientists assume that sorghum bran can be included in various foods and beverages either as a liquid concentrate or dried powder.

Phillip Greenspan, associate professor in the UGA College of Pharmacy and co-investigator affirmed, “High-tannin sorghums can be of greater economy to manufacturers because of the current cost of berry and fruit sources of similar plant-based chemicals.”

Sorghum bran as claimed earlier is the richest and the cheapest source of antioxidant and anti-inflammatory properties, so it can be a helpful nutritional food additive in our diets. In course of the research, investigators added the bran in apple juice to make it an affordable substitute to pomegranate juice and other antioxidant-rich products. High-tannin sorghum probably has more antioxidant phytochemicals than other brans like rice, wheat and oats, which are low in phenolic content and antioxidant values. It seems that sorghum bran provides fiber along with various useful chemicals that are discovered in a berry.

The research was published in the current issue of the Journal of Medicinal Food.