Exactly a month before we had reported that cycling can create issues like skin irritation in the genital area, erection problems, genital numbness and other relevant problems in male cyclists. The solution to these problems was suggested to be the ‘right bike’, although ‘which is a right bicycle’ was not described by Vinod Nargund, consultant urological surgeon from St Bartholomew’s and Homerton Hospitals, London, who had warned about the problems. 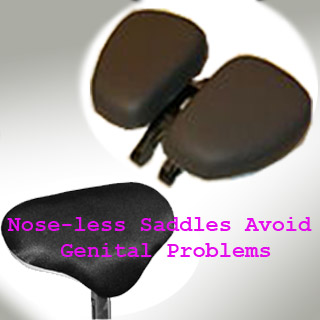 Now, finally, the right bike is out. A new study has discovered that a bike with noseless saddles has proven to be quite effective in avoiding erectile dysfunction, groin numbness and other disastrous ill-effects of bicycling. This is because there is no nose in the saddles to interfere with the perineal region. The positive results of the noseless bikes have come from the evaluation of 90 bicycling police officers out of which 82 percent did not experience any numbness or relevant penile problems in the 6 months of using the right bicycle. 97 percent of the officers ended up using no-nose saddle even after the study.

Dr. Steven Schrader of the National Institute for Occupational Safety and Health in Cincinnati, first author of the study stated, “No-nose saddles are a useful intervention for bicycling police officers alleviating pressure to the groin and improving penis health. Different saddle designs may require some re-learning of ‘how to ride a bicycle,’ but the health benefits to having unrestricted vascular flow to and from the penis and less penile numbness is self-evident.” Schrader along with his research team has received the Bullard-Sherwood Research-to-Practice Award in the Interventions Category for ‘Health Effects of Occupational Cycling’.