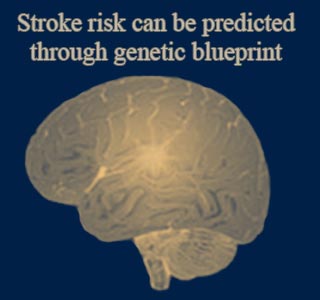 A latest study states that a new statistical model can be made use of to predict a person’s lifetime risk of stroke. This study was conducted by the Children’s Hospital Informatics Program.

The study investigators made use of the genetic data of 569 subjects to demonstrate that this statistical model can predict a person’s lifetime risk of cardioembolic stroke, which is the most common form of stroke. The model could detect stroke risk in an individual with 86 percent accuracy.

Study author, Marco Ramoni, PhD, researcher at the Children’s Hospital Informatics Program, says that, “For complex diseases like stroke, it’s not just a single mutation that will kill you. More likely it is an interaction of many factors.”

The investigators looked for the various genetic variants that were believed to be associated with stroke, in the genetic data accumulated from the study subjects. The genetic variants known as single nucleotide polymorphisms, of each subject was entered into the model, called the Bayesian network.

Ramoni states that, “The model looks for factors, combines them and finds out which are the best predictive factors. It’s never one factor at a time; it’s always more than one factor. What this technology allows you to do is to generate a network of factors that contribute to stroke.”

The model not only detected the genetic variants linked with stroke, but also verified how these factors interplayed and the strength of these interactions. Ramoni says, “It sounds like magic. But it’s just a piece of technology. It gives hope that we will be able to predict early on whether someone is at risk of getting stroke, and allow you to convince them to make life changes.”

The study investigators believe that this model can be used as a diagnostic tool. They say that detecting all the genetic variants correlated to stroke, could give an insight into its mechanism and provide targets for future drugs.

Their findings are presented in the Stroke issue.