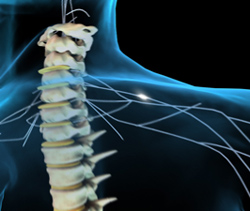 People suffering from spinal injuries like low back pain and disc disorders can now have a reason to smile, as injections of ozone gas could bring better results than conventional surgery. Ozonucleolysis, as the treatment is medically known, has started gaining ground in western countries.

“Ozonucleolysis or ozone discectomy for curing spinal injury is a better option than surgery. This new form of treatment is less painful as well as cost effective,” Vijay Sheel Kumar, president of the World Federation of Ozone Therapy (WFOT), said.

“In case of surgery, the chance of recurrence of pain is nearly 15 percent as against less than three percent in ozone treatment. In the new treatment, patients don’t have to stay in the hospital for a week. Only six sittings of one hour each spread over three weeks can cure the problem,” said Kumar.

Ozonucleolysis has emerged as an affordable, least invasive approach and costs two-thirds the price of a conventional surgery.

Ozone discectomy is the injection of ozone inside the affected intervertebral disc. When injected, Ozone (O3) breaks down into O2 and O (single oxygen) and rapidly dissolves in the water in the disc.

As per the new technique, ozone is injected in the spine with 22G needle under the fluoroscopic guidance, with 4ml of a mixture of ozone and oxygen at a concentration of 30 micrograms per millilitre.

It causes shrinkage of the disc, thus reducing its volume and lessening pressure on the nerves. The treatment relieves pain substantially and, after two sittings, people “can go back to work under medical guidance”, Kumar explained.

Kumar said fewer than 10 doctors in India are currently equipped to conduct this procedure.