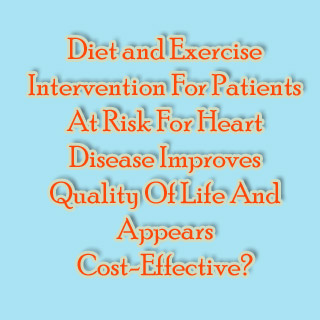 A combination of healthy diet and appropriate exercise seems to be of extreme importance in the health terrain. A latest study suggests that exercise and diet counseling in primary health care settings enhances the quality of life among adults at moderate to high risk for heart disease. This lifestyle intervention appears to be cost-effective in comparison to standard care.

Almost all individuals in developed countries are probably unable to meet the recommended levels of physical activity. Hence such people may be at a greater risk of illness and death. The authors analyzed effect on quality of life and cost-effectiveness of a three-year lifestyle intervention program. The study was carried out on 151 men and women at moderate to high risk of cardiovascular disease who were visiting a primary care center in northern Sweden.

Investigators quote, “Extensive and intensive lifestyle intervention programs delay the onset of diabetes mellitus and reduce cardiovascular risk by increasing physical activity, reducing overweight and making changes in dietary habits,” the authors write. For a comprehensive assessment of an intervention program it is essential to incorporate the individual’s broader perspective of well-being, not only the conventional medical outcomes.”

While six patients withdrew, 71 were randomly assigned to the intervention. This intervention encompassed progressive exercise training three times a week and diet counseling along with regular group meetings. On completion of the initial three-month intervention period, volunteers had to attend group meetings at regular intervals. They were advised to maintain at least 30 minutes each day of physical activity.

Scientists conclude, “These results should be viewed in the context of the previously reported favorable impact on physical activity, fitness, waist circumference, waist-to-hip ratio, blood pressure and smoking cessation over the three-year period. Thus, high-intensity and long-lasting interventions can produce sustainable improvements in quality of life and can obviously be cost-effective,” they conclude. “Such programs may be a wise use of resources in primary health care for patients with disease to which inactivity strongly contributes.”

74 individuals were included in the control group who were provided with verbal and written information about exercise and diet at one group meeting. Margareta K. Eriksson, Ph.D., of Björknäs Health Care Center, Boden, and Umeå University, Umeå, Sweden, and colleagues then registered the differences in both the groups. Over the three-year period, variations in most of quality-of-life measurements appeared.

The study is published in the September 13 issue of Archives of Internal Medicine, one of the JAMA/Archives journals.