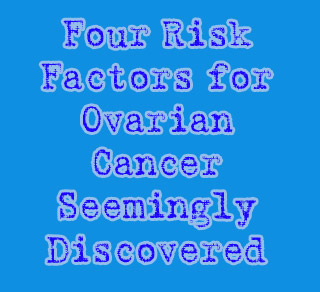 While a previous investigation claimed to have found link between meat, fish and elevated risk of ovarian cancer, here is a tidbit that explains how to avert chances of developing the disease. A team of cancer investigators from The Ovarian Cancer Association have apparently discovered four chromosome locations with genetic changes that can modify a woman’s risk of developing ovarian cancer. The findings may help move a major step closer to individualized risk assessments for ovarian cancer.

Women at greater risk because of such or other inherited changes can probably be subjected to heightened surveillance or preventive measures. It is known that SNPs, (single nucleotide polymorphisms) are common genetic variants correlated with cancer risk. The results of the study come from a large genome-wide association study (GWAS) that included three continents. After following an initial study in around 1,700 cases, experts followed up a study of over 24,000 women. Having scrutinized nine regions in detail, three loci were affirmed to be much stronger than the others and a fourth ‘approached genome-wide significance.’

Ellen Goode, Ph.D., Mayo Clinic genetic epidemiologist and lead author said, “In searching the genome, we came up with some surprises on chromosomes 2, 3, and 17. While examining the usual suspects in a region on chromosome 8, we found that SNPs associated with ovarian cancer risk were located quite a distance away from those associated with risk of other cancers, which suggest that they may act through a different mechanism.”

These loci are seemingly linked with serous ovarian cancer, which is the most aggressive and common of the four main types of the disease. In the course of the second study, authors supposedly identified another locus on chromosome 19. Further investigations can be initiated to analyze the function of certain chromosomal regions involved in susceptibility.

The study is published in Nature Genetics.