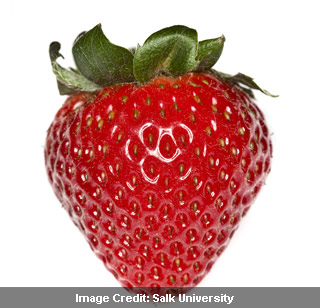 Now who likes visiting a doctor every other day? And imagine if relishing a strawberry would help instead? A recent research from scientists at the Salk Institute for Biological Studies reveals that savoring one strawberry each day or specifically 37 of them could make the visit to a doctor a rare occurrence. It appears to keep the person away from the neurologist, the endocrinologist, and even the oncologist.

Fisetin is a naturally occurring flavonoid that is often present in strawberries to a great extent and in other vegetables or fruits in lesser quantities. The analysis put forth that fisetin seems to have the ability to reduce complications of diabetes. Initially, laboratory trials showed that fisetin encouraged survival of neurons in culture and improved memory in healthy mice. A single drug of fisetin may be used to combat several health issues as it is seemingly capable of targeting many organs.

“This manuscript describes for the first time a drug that prevents both kidney and brain complications in a type 1 diabetes mouse model. Moreover, it demonstrates the probable molecular basis of how the therapeutic is working,” commented David Schubert, Ph.D., professor and head of the Cellular Neurobiology Laboratory and one of the manuscript’s co-authors.

Fisetin was initially unfolded by scientists 10 years ago. Flavonoids play the role of sunscreens and shield plants and fruits from pests. They apparently support the ‘Mediterranean Diet. Other top notch flavonoids include polyphenolic compounds found in blueberries and red wine. To test the effectiveness of fisetin for diabetes, the researchers examined the results of fisetin supplementation in Akita mice. They are a massive model of Type 1 diabetes also known as childhood onset diabetes.

Akita mice carry higher levels of blood sugar apparently found in Type 1 diabetes and also include some effects of both the types of diabetes. These are inclusive of diabetic nephropathy or kidney disease, retinopathy, and neuropathies which cause patients to lose their touch or heat sensations.

Mice which were made to consume a diet enriched with fisetin remained diabetic. But other conditions like kidney enlargement-or hypertrophy-observed in untreated mice were seemingly reversed and high urine protein levels, which is a major sign of kidney disease was supposedly reduced. Furthermore, fisetin seemed to improve anxious behaviors observed in diabetic mice. It was seen that mice when left in the open moved to explore things but mice facing some sort of anxiety would presumably not move. Akita mice showed higher levels of anxiety-related behavior. Administering fisetin brought back their movement to normalcy

The research further revealed a likely molecular mechanism outlining these results. It was observed that blood and brain proportions of sugars attached to proteins known as advanced glycation end-products-or AGEs-were apparently decreased in fisetin-treated mice unlike the untreated Akita ones. The reduction levels were supported by enhanced activation of the enzyme glyoxalase 1, which accelerates elimination of toxic AGE predecessors.

It was also noted that high AGE levels correspond to inflammatory activity that is thought to trigger some cancers. According to the research, fisetin reduces tumorigenicity of prostate cancer cells in both culture and animal models. If this is supported it would add one more reason to consume strawberries. To equal the amounts fed to Akita mice and to show respective effects, humans may have to eat 37 strawberries a day since strawberry fisetin appears to be easily metabolizable by humans. Fisetin-like drugs could also be taken as supplements instead of diet.

According to researchers fisetin apparently showed its effect in mice models of Alzheimer’s disease too. Diabetes is thought to be a risk factor for Alzheimer’s and unfolding of a safe prophylactic fisetin could be prominent in this case. However, scientists may have to perform more trials to check if fisetin brings out the desired effects in humans too.

The research is published in the June 27 issue of Plos One.