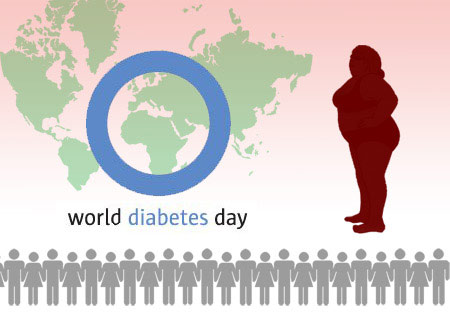 November 14 was entitled as World Diabetes Day by the International Diabetes Federation in 1991 to create awareness and promote prevention of this growing pandemic. It became a UN recognized day from 2007 after a resolution by WHO. This day marks the birthday of Frederick Banting, who along with Charles Best paved the pathway of discovering insulin way back in 1922. The purpose of celebrating World Diabetes Day is to create awareness of the disease which makes 7 million people worldwide its victim each year.

It aims at educating people to watch for warning signs, symptoms and factors contributing towards becoming a diabetic. The day also focuses on promoting ways of avoiding and controlling diabetes. Various rallies, cycling events and races, walks, radio and TV programs, print media, free public screenings and exhibitions are organized worldwide. These programs are initiated with help of member nations and participating NGOs, various health societies, departments as well as enthusiastic volunteers all over the world.

The day is represented by a simple blue circle signifying the sky above us uniting everybody and all nations. Also present on the UN flag, the circle signifies health and life across every culture. The blue circle thus has an overwhelming positive influence and deep significance. It implies the togetherness of global diabetic community in the battle against this growing pandemic. Each year a theme is chosen to focus upon creating awareness. The theme for 2009-2013 is Diabetes Education and Prevention. Previous themes have focused on diabetic foot care (2005), disadvantaged and vulnerable individuals (2006) and diabetes in children and adolescents (2007-08).

Diabetes mellitus, commonly referred to as diabetes, is actually part of a group of metabolic disorders called Diabetes. Seldom patients are diagnosed with the other disorder named Diabetes Insipidus. Diabetes Mellitus almost translates to ‘excessive sweet urine’ or ‘glycosuria’ while diabetes insipidus implies ‘excessive urine without taste’ or ‘polyuria’.

Diabetes is of two types – Type 1 and Type 2

Type 1 diabetes is caused because beta cells are absent in the pancreatic islets of Langerhans. Since the cells are not present they lead to an insulin deficiency. The loss can be immune-mediated or idiopathic. It primarily affects children and hence also termed as Juvenile Diabetes. Apparently, insulin supplementation is the only treatment option available and the response is good.

Type 2 diabetes, on the other hand, is triggered due to insulin resistance primarily with some amount of reduced insulin production too. It most commonly affects adults and is the major cause of diabetes worldwide. Several oral medications can be used to control the raised blood sugar levels and insulin is generally the last resort.

The symptoms of diabetes are frequent urination (polyuria), increased thirst (polydipsia), heightened appetite (polyphagia), recurrent infections, and sudden weight loss. Obese people or those with a raised cholesterol level and family history of diabetes are at a greater risk of acquiring the ailment. Expecting mothers may face the threat of developing gestational diabetes. The illness is a result of insulin resistance and resolves spontaneously with delivery.

Diabetes is dreaded for the simple reason that the complications can be severe and even life-threatening. The heightened blood glucose levels lead to recurring infections of urinary tract, skin and reproductive organs. Some of these infections can be severe and may not be treated easily, further leading to complications of their own. The damage caused to the retina in long-standing diabetes paves way for complete loss of vision. The kidneys are hampered which probably results in chronic renal failure and end-stage renal disease.

Those with co-existing cardio-vascular disorders are the worst hit. Diabetes and blood pressure aggravate each other. Diabetes increases chances of heart attacks, stroke and peripheral neuropathy, which manifests the tendency to get injured easily due to sensory loss of extremities. It causes multiple other problems due to the impact on autonomic nervous system like constipation, postural hypotension leading to episodes of dizziness. The ailment affects joints resulting in arthropathy and ulcerations. Furthermore, blood supply to the limbs is declined causing pain (claudication).

Prevention of diabetes requires a multi-pronged approach. Factors like smoking and alcohol consumption have to be completely avoided. Since excess weight is one of the largest contributing factors in type 2 diabetes onset, controlling obesity seems to be of prime importance. Individuals should take a control of their diets by excluding fats in cheese, butter, ghee, fried foods and including high fiber rich protein substances. Moderate intake of carbohydrates is expected along with a few calories. Fresh fruits and vegetable must be a compulsory part of daily diet. Salt can be restricted as it leads to hypertension that aggravates a diabetic. Exercise, brisk walk, playing sports, yoga and diet control can help manage weight.

As far as medication goes, various oral drugs are available to control diabetes like megletinides, metformin, sulphonylureas, thiazolidinediones etc. But each patient needs tailor-made prescription to control sugar levels depending on their dietary habits. When oral medications are no longer efficient, insulin supplementation is adopted for treating type 2 diabetes.

Sometimes a combination of oral medication and insulin therapy is also given. But the most important side-effects of medication as well as insulin include hypoglycemia episodes. Dosages should be altered to maintain adequate sugar levels and prevent such episodes. Insulin therapy also leads to weight gain, peripheral edema and lipodystrophy at injection sites.

All in all, following the path that says prevention is better than cure seems to be more relevant in diabetes.