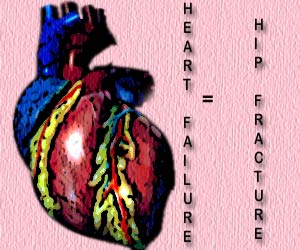 Heart failure and fractures-seems like a rather weird link doesn’t it? But researchers have another story to tell. If Canadian researchers are to be believed then people who have suffered from heart failures are at increased risks of fractures, yes even painful hip fractures. As against patients with other heart problems, these individuals should be screened and treated for osteoporosis.

According to Justin A. Ezekowitz, M.D., senior author of the study and director of the Heart Function Clinic and assistant professor of medicine at the University of Alberta in Canada, “This is the first study to link heart failure patients to a higher risk of fractures. Heart failure and osteoporosis share common risk factors such as older age, female sex, smoking and type-2 diabetes.”

To conduct the research nearly 16,294 patients between 68 to 84 years were included. With a little more than 2000 patients at an average age of 78 years, the heart patients were particularly among those who were present at emergency rooms in Alberta, Canada between 1998 and 2001 with a new diagnosis of heart failure. The researchers noticed after a one year follow up that the chief aftermath of the heart failure was fracture that needed the patients to get admitted in hospitals.

The researchers bring to light the fact that even after adjusting for other risk factors, heart patients were four times more likely to suffer from fractures and nearly 6.3 times more likely to suffer from hip fractures in comparison to patients with heart attacks, chest pain or rhythm disturbances. One year after visiting the hospital’s emergency room nearly 4.6% heart failure patients as against 1% patients with other heart problems suffered a fracture. Considering the same time period, the risks for hip fractures was 1.3% for those with heart failure as against a 0.1% for other heart patients.

Experts suggest that heart failure patients must increase their daily intake of bone strengthening vitamins and also get checked for osteoporosis at their earliest. The study goes on to reveal that heart failure is among the leading causes of hospitalizations and deaths, taking a toll on nearly 2.2% of the general population and about 8.4% in people above 75 years of age.

Funded by the Randomized Controlled Trials program of the Canadian Institutes of Health Research, the study is published in the Circulation: Journal of the American Heart Association.