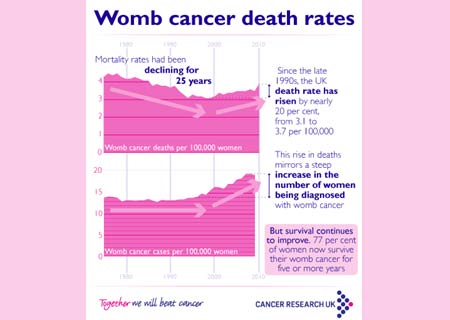 Cancer of any kind elicits some amount of anxiety in people, possibly because of the difficult and invasive nature of the disease. According to a report by Cancer Research UK, the number of womb cancer cases is showing an upward trend.

The team found that womb cancer deaths apparently increased by 20% since the last 10 years. In late 1990s, the death rate due to the condition amounted to nearly 3.1 per 100,000 in the UK, but is presently 3.7 in the same group. This means above 1,900 women succumbed to the disease each year relative to less than 1,500 in the beginning of the millennium.

Professor Jonathan Ledermann, Cancer Research UK’s gynaecological cancer expert, quoted, “It’s hugely troubling that more women are dying from womb cancer, but we shouldn’t let this cloud the fact that the chances of surviving the disease are still better than ever.”

On the flip side, the survival rate of the disease also improved with nearly 77% of women living with the condition for 5 years or more. Since the mid 1990s, the incidence of the disease seemed to rise by almost 43%.

The investigators mentioned that obesity may be the principal causal factor for this rise in womb cancer instances. They added that obesity raised the risk factor by a minimum of 2 folds with respect to this cancer.

Women need to be cautious of womb cancer symptoms and need to maintain a healthy body weight, concluded the scientists.