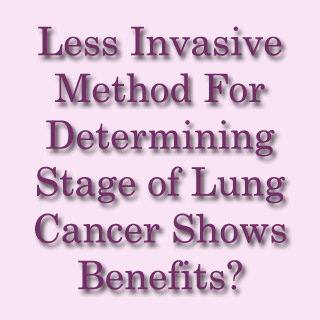 While diagnosing lung cancer, physicians may adopt various methods including endosonography or mediastinoscopy. A latest study suggests that the stage of suspected non-small cell lung cancer (NSCLC) can be ascertained by the less invasive method. This form of method probably declines unnecessary surgical procedures and associated adverse effects for some patients.

A randomized controlled multicenter trial was initiated between February 2007 and April 2009 on 241 patients with resectable NSCLC. Mediastinal staging of the volunteers was apparently based on computed or positron emission tomography. Surgical staging was compared with endosonography that may include combined transesophageal and endobronchial ultrasound. Patients were subjected to surgical staging or endosonography followed by surgical staging in case no nodal metastases were found at endosonography. Thoracotomy with lymph node dissection was performed when there was lack of evidence on mediastinal tumor spread.

Investigators shared, “We have shown that commencing mediastinal nodal staging with endosonography significantly improves the detection of nodal metastases and reduces the rate of unnecessary thoracotomies by more than half compared with surgical staging alone, in patients with resectable NSCLC. Furthermore, endosonography does not require general anesthesia, is preferred by patients, and is considered cost-effective compared with surgical staging.”

The study was published in the November 24 issue of JAMA.