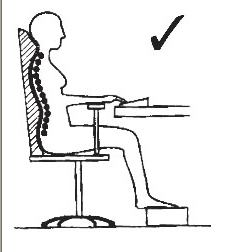 A new study has found that a bad posture plays a significant role in increasing the blood pressure.

In their study, Jim Deuchars and colleagues at the University of Leeds, UK, have found a link between the muscles in the neck, blood pressure and the heart rate.

The researchers say their findings explain why the blood pressure rises when people position their bodies the wrong way, for example hours spent hunched over a computer; or why there is a change in blood pressure and heart rate, when the neck muscles are injured.

The team suggests that there is a direct neural connection between the neck muscles and a part of the brainstem, called the nucleus tractus solitarius (NTS), which plays a key role in regulating heart rate and blood pressure.

For the study, Deuchars’s team used mice to examine how the brain reacts to a range of stimulatory and inhibitory proteins. The team observed that a set of brain cells connected to the neck muscles kept firing in response to both types of proteins, signifying that the cells played a very dynamic role in the brain.

“The cells lit up time and time again, so we looked at what they were doing,” said team member Ian Edwards.

Tests further showed that these cells are connected to the NTS as well, indicating that they play a crucial role in regulating heart rate and blood pressure.

“The pathway exists for bad posture to really have an effect,” Edwards said.

Three steps to treat tooth erosion caused by the intake of...